I’m the worst at blogging. Truly. But it’s been a wild six weeks, creatively, and I’ve got NEWS.

The first news is that at long last, Nick & Poppy, whose socially distanced romance originated on this site for my newsletter subscribers, finally have a real book that you can preorder now for 99¢. THE BEST LAID PLANS will release on December 18, and the price will go up slightly once it’s released, so grab it now…

For those who aren’t familiar with this story, here’s the blurb and a little cover reveal: 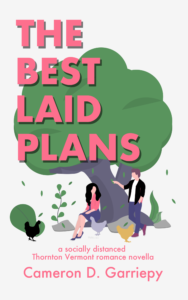 The Best Laid Plans
They didn’t plan on falling in love.

Poppy Daley is staying on her parents’ Catmint Gap homestead when the global pandemic traps them abroad. Their chickens and gardens can’t take care of themselves, and Poppy’s job can be done from her laptop.

Disgraced TV writer Nick Cooper is hiding out in a rented cabin up the mountain from the Daley’s property, oblivious to his neighbors until an old friend gets lost dropping off a care package and offends the girl next door, bringing Lilac Lane’s only residents into one another’s orbits.

Poppy and Nick share an instant connection, but masks and social distancing hardly lend themselves to romance…or do they? When the quarantine curveballs keep coming, it’s up to Nick to prove to Poppy that misfortune can only delay the best laid plans.

THE BEST LAID PLANS is currently available for pre-order via Amazon, Barnes & Noble, Apple Books, and Kobo, with more retailers being added daily. The link will take you to your store of choice.

But that’s not all!

In early October, I joined a group of small town romance authors to bring you a box set containing twelve exclusive, new novellas–all for free. In addition to the box set, everyone who signs up to download it will receive another free, exclusive title from each author over the next twelve months. These two new books will be exclusive to the collection from January to April of 2021, then released to the public.

If you’ve been with me long enough, you’ll remember Sam & Will, two characters who, despite not having a book of their own, have stayed with me for a decade. They waited patiently, and you get the rewards. For this collection, I’m debuting a new series of novellas: Green Mountain Hearts. Book one, titled AMBITIOUS HEART, introduces Blueberry Hill, Vermont, a hamlet in the Green Mountains, not far from Catmint Gap, and one of its most ambitious young residents, Marnie Burnham.

Book two returns to Blueberry Hill a few years later, when Sam Ellis returns to town after escaping a miserable marriage, only to run into the boy who stole her heart as a teenager. Will Dryer is all grown up…and ready to go after the woman who’s never quite released her hold on him.

Book three…will release traditionally in the late spring, along with the other two. Who’s it about?Spoilers!

More details will come a little close to the collection’s launch date.

Until then, here’s a little sneaky peek of AMBITIOUS HEART. Enjoy!