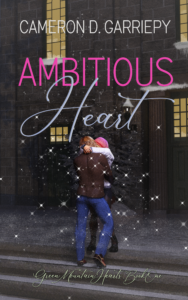 There were few things Marnie Burnham loved more than a bluebird day in January, when a fresh flurry sugared the week-old slush and the late afternoon sun gilded the frosted mountains that stood sentry over the village of Blueberry Hill.

The second Thursday of January in 2002 was going to the top of her list. Not only were the makings of a storybook sunset assembling over the far distant Adirondacks, but she’d spent the cloudless day on the slopes with her dad, testing out the new Burton demo board he’d gotten in at the pro shop, and tonight… Tonight, after a hundred years, the lease on the Blueberry Hill Grange Hall expired, and per town ordinance, the board of selectmen could re-designate the property for public use.

Marnie Burnham had a plan.

She dodged a patch of ice, tightening her grip on the sheaf of paperwork tucked under her arm. Her iBook was fully charged, ready to plug into the projection system she’d borrowed from the Thornton College tech library. If she was using a bedsheet as a display, well, Truman Bixby and the rest of the board would just have to excuse her lack of professional presentation equipment.

Her phone rang, and Marnie stopped to perch on the bench outside Karly’s Klips while she took the call. The name on the display brought a smile to her face.

“Sam!” Marnie tucked the phone between her cheek and sat on the file folders to keep them from blowing away. “I got your email earlier. How was the first day of subbing? Those kids don’t know how lucky they are.”

“I’m the lucky one.” Samantha Ellis was her oldest friend. Oldest and farthest away. Sam was at Tulane getting a masters in education, and in Marnie’s opinion, not seeing nearly enough live jazz. “The kids are great, my graduate program is great, and I’m volunteering through a charitable foundation sponsored by the Lacroix family, which is kind of a big deal.”

“You know what else is a big deal?” Marnie grinned, winding up for a well-used inside joke.

“Live music in New Orleans,” Sam said with a sigh. “I know. I promise. Maybe I’ll ask Craig to go with me.”

“Did you just bury a man-lede on the second Thursday of January in 2002?” Marnie resisted the urge to shriek. Selectman Bixby was a block away headed for the town offices. “I wish you could be here tonight to watch me convince that bunch of fossils to give the one-woman Blueberry Hill Farmer’s Market Committee the Grange Hall…right before I grill you about Craig.”

Marnie was about to hang up the call when a shiny mid-size pickup with New York plates growled to a stop outside Video Visions and more than six well-filled-out feet of Viking-meets-surfer dropped down from the driver’s side.

“I’m going, but before I do, let me say that a Toyota Tacoma just parked outside Jim Dix’s video store like he owned the place, and I’m thinking about including myself as a rider on the contract, if you know what I mean.”

Sam’s laugh was loud enough through the phone that the surfer Viking turned in Marnie’s direction, catching her in the act of checking him out. His face was in shadow, but she got the impression of a strong profile, and holy hell, he wore glasses. Seriously sexy frames and a low, not-too-long ponytail of dirty blond hair; a body built for pillaging dressed in a crisp button down and wool pants that fit like they’d been tailored.

Who was this guy and what on earth was he doing in Blueberry Hill, Vermont?

“Helloooooo? Marnie,” Sam said, maybe for the second or third time. “I’m hanging up. I love you. Good luck!”

“Thanks, Sam. Talk soon!” Marnie flipped her phone shut and shoved it toward the bottom of her bag, sucking in a lungful of cold air to clear her head. She had a room of selectmen and townsfolk to wow.

What Marnie lacked in resources, she more than made up for in passion and forward thinking. Her mother’s homemade soaps and cleaning products flew out of the baskets and bins in the refurbished pop-up trailer she towed around to county fairs all summer. Local folks knocked on the Burnhams’ back door, and the general store over in Catmint Gap sold out weekly. The Beasleys’ honey was legendary as far south as the Deerfield Fair, and any number of veggie patches and chicken coops around town traded and sold goods between neighbors in their foothills hamlet.

All across the state, farmers markets were cropping up and expanding like wild mushrooms. Blueberry Hill was near a major ski area, a good-sized college town, and the Appalachian trail, and there were a bunch of local farms, orchards, and crafters around who could anchor a diverse market. The kind of market that could support a micro-economy if it ran year-round, and where better to run year round than in the Blueberry Hill Grange Hall, a wide open indoor space that would belong to the town as of midnight.

Marnie spun around to find her mother rushing down the sidewalk, a cloud of scarves and graying curls floating around her face like a corona in the sunset.

“I slipped into the town meeting room earlier this afternoon and worked a little charm for favorable outcomes, I have samples in a basket to leave near the door and some notes for my testimonial–” Daphne Potter caught Marnie’s brewing interruption and cut her off. “No love potions in the shampoo, promise, and I won’t even bring up that I’m your mother. Did you wear your sapphires?”

Marnie sighed and touched the sapphire chip earrings her parents gave her for her sixteenth birthday. “Because they’re the nicest ones I have, Mom.”

“They’re lucky.” Her mother tsk’d. “You have magic in your blood, Marnie. All the Potter women have it. You shouldn’t knock it ’til you try it.”

Her mother muttered something about the patriarchy as she drifted past her on a bergamot scented cloud, patting Marnie’s cheek as she passed.

It took twenty minutes to hang up the white sheet, find a suitable place to set up the projector and get her iBook connected. She tested her PowerPoint slideshow, went through her notes, and fidgeted with her dress’s hem. The straight sheath style with the short–but not too short–skirt was the most adult thing she owned, bought for job interviews after college a few years before. She’d debated showing up in her usual uniform of thrift store flannel, bootcut jeans, and Bean boots, but she wanted the board to take her seriously.

It was an eternity waiting through the shuffling of seats, the reading of minutes, and the discussion of a minor change to the dog licensing bylaws. Finally, Truman Bixby announced the matter of the Grange Hall lease.

“The terms of the Pinckney estate stipulate that we must hear proposals for the use of the hall prior to the close of the hundred-year Grange Hall lease period. The town will then choose, at the discretion of the board of selectmen, which proposal to grant the next lease period to and for how long. If no feasible proposal is offered, the land reverts to the town to dispose of as it sees fit.”

Tom Crawford hefted his portly frame out of his chair and announced the Blueberry Hill Farmer’s Market Committee. Marnie ignored the smattering of laughter from the assembled crowd as she walked to the front of the room.

“Good evening, Selectman Bixby, Selectman Crawford, the assembled board, friends, neighbors.” She paused to snatch a breath and squeeze her fingers together to quell her anxiety. “I’m fairly certain I know everyone here, but I’ll introduce myself anyway.” Her gaze fell on the Viking surfer from New York, as if on cue. He sat in the third row, his hair gilded by the terrible overhead lighting in the meeting room, his expression carefully neutral. He did have a strong profile, but a gentle mouth, with laugh lines, or maybe too-much-time in-the-sun lines. “I’m Marnie Burnham, founder of the Blueberry Hill Farmer’s Market Committee, and I propose the Grange Hall be turned into a year-round open market for regional crafters, farmers, and artisans to create a local micro-economy that serves both community interests and tourism demands. If you’ll all indulge me, I’ve prepared a short presentation.”

As she spoke the jittery nerves melted away. The technology actually behaved, and the presentation went off without a hitch. Even her mother, with her hippie folk magic vibe, managed to stay on message, and people around town did love the soaps.

“Thank you all for your time. I hope you’ll consider this proposal to enrich our community in spirit and in commerce.”

She took her seat, and let her hands and feet shake the way they’d wanted to for the last twenty minutes.

Arlene Levesque stood, prim and formal as she’d been twenty years before when she’d taught Marnie’s Kindergarten class. “The number of proposals submitted in advance was a matter of public record. We had planned to hear three tonight, but the two remaining have withdrawn, citing financial reasons.” Arlene’s brow creased slightly as she surveyed the room. “If there is anyone in the audience this evening with a proposal to add, we will hear it now, otherwise I think I speak for the board when I say Marnie Burnham’s passion for the marketplace certainly grants her at least a short term lease to try the idea out.”

Marnie’s heart flipped over in her chest and she bit her lip to keep from letting her joy get the better of her volume control. There was no way anyone in the room would take this away from her. Not now.

“Excuse me, Madame Selectman, members of the board.” The Viking surfer stood, tugging at his cuffs and clearing his throat. “My name is Micah Reynolds, representing Simmons-Doyle Development of Albany. My firm is prepared to buy the property outright at 110% of market value for the development of a boutique micro-hotel property, should the board decide not to grant a lease.”

Marnie’s pulse slowed and the floor seemed to fall away beneath her, even as she straightened her spine and stared the handsome stranger down for the second time that day. This time, she didn’t see a long-legged, seafaring god. The man who’d just offered the town a fortune in exchange for her dream resembled nothing so much as a flint-eyed marauder.