I’ve been quietly lurking on BYC for four years, planning, waiting… And last October, my small city relaxed the chicken keeping laws, allowing flocks of up to 6 hens on a residential property, if properly registered.

Over the winter, I hatched my plans, and in March–just before COVID-19 brought everything except domestic arts to a screeching halt, I ordered my 4 flock-starter hens. Ahead of the curve by about 3 days. I read articles, perused plans, considered blueprints and filled up a Pinterest board with coop and run ideas, but even after the little floofs arrived in late April, I was revising my ideas. 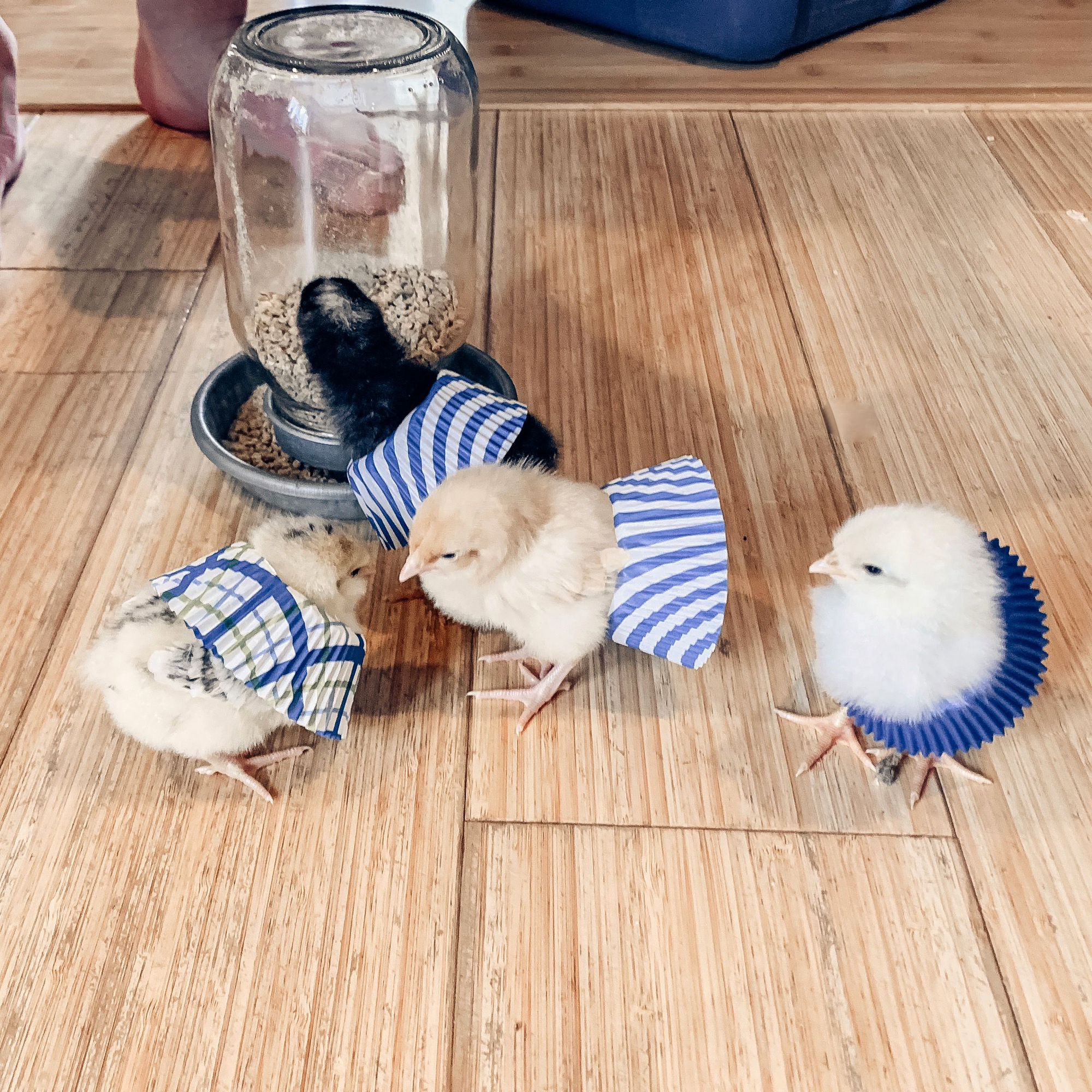 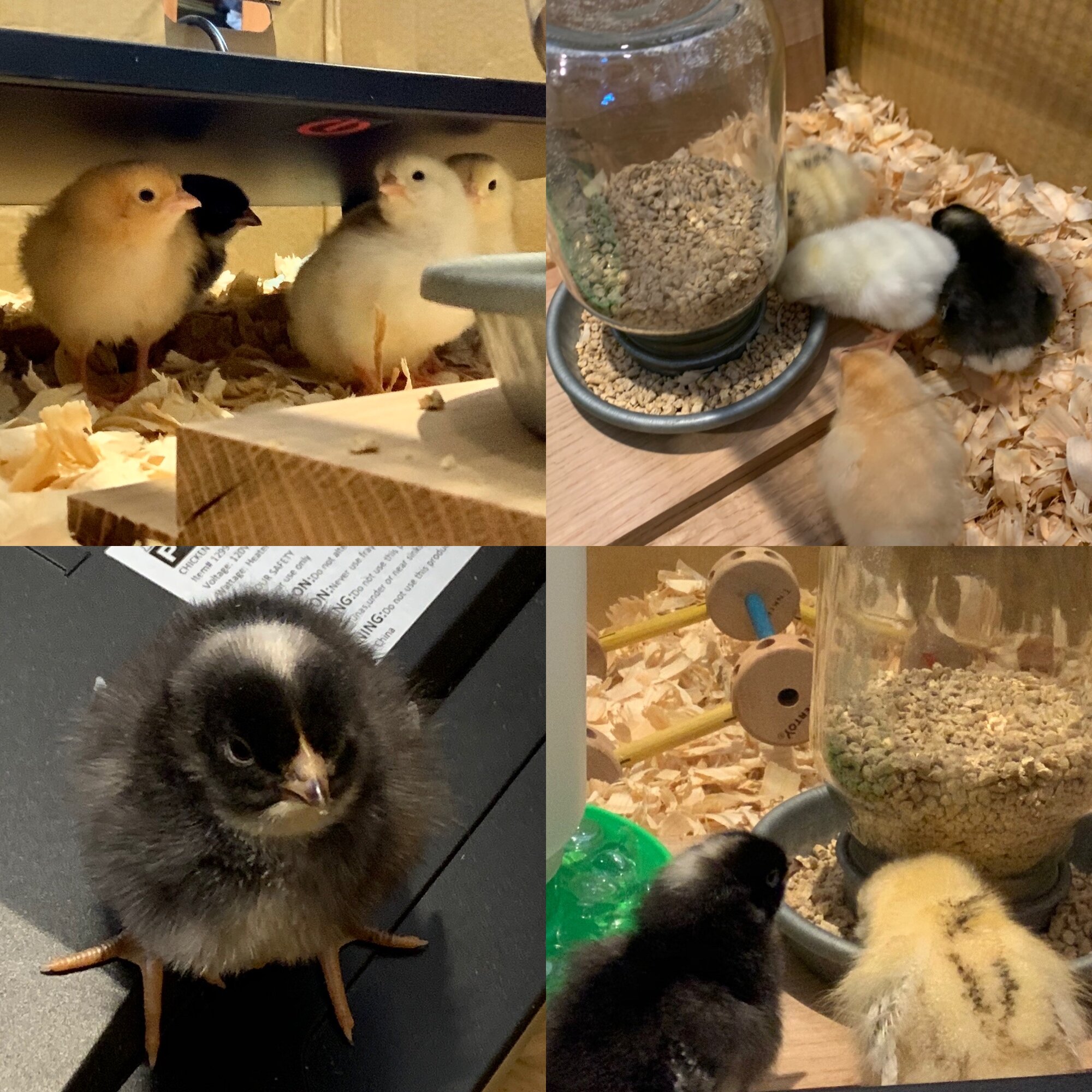 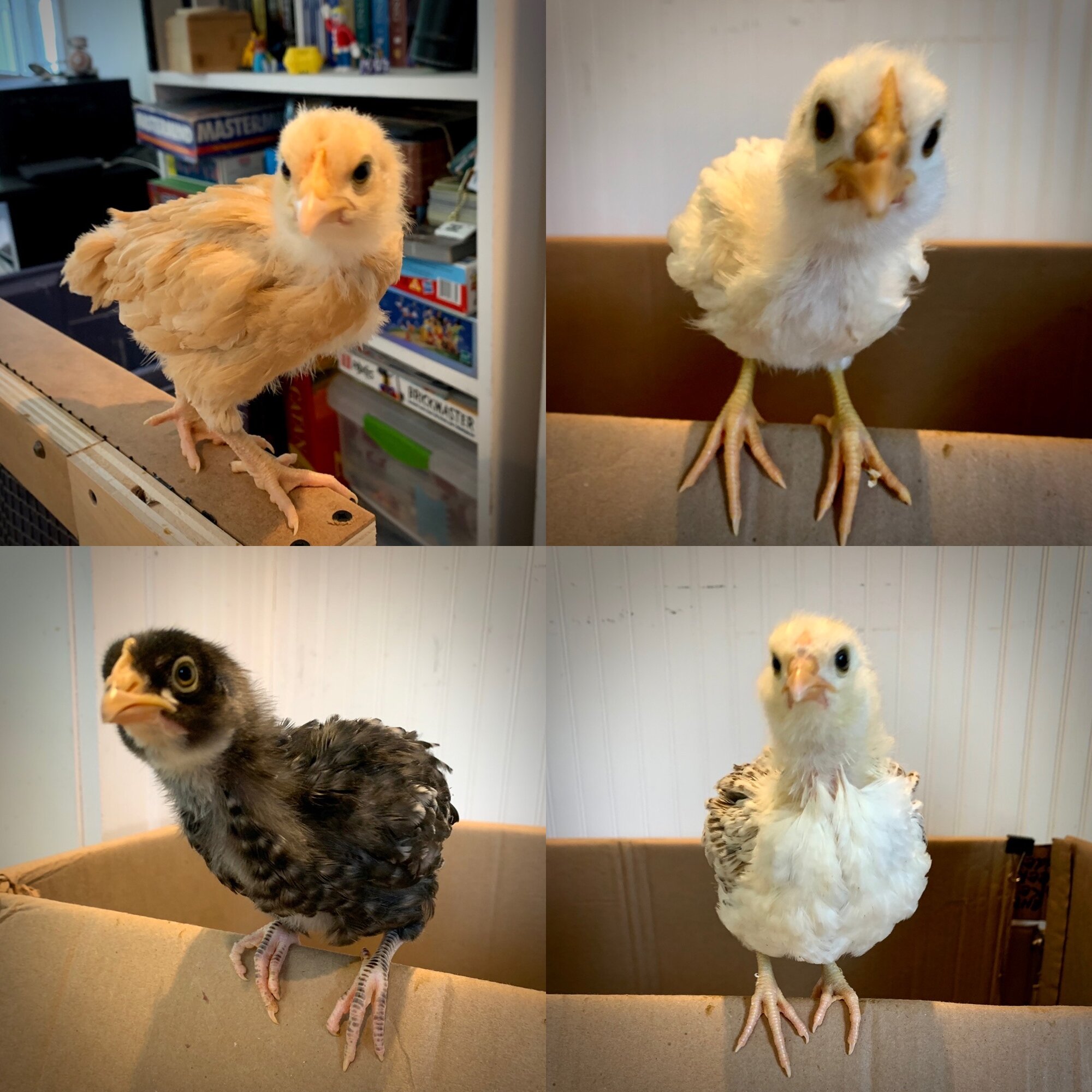 (Holy carp, chicks are cute. In the third image, clockwise from the top left: Flüf, Giraffe, Sharpie, and Trudy–Buff Orpington, Austra White, Green Queen Easter Egger, and Silver Cuckoo Marans) Fortunately for me, I’m married to a finish carpenter who’s been a general contractor for twenty years. “This is your project, he told me, but if you want me to build you something…”

We live in east-central MA. We have four distinct seasons, with hot, humid late summers and bone-dry, frigid midwinters. We live in a large suburb of Boston masquerading as a small city. Our home is on less than a tenth of an acre. We already have a significant raised bed garden and nascent fruit trees; chickens were inevitable, as I see it. I wanted a coop and run my son (12ish) and I could handle between us. He’s all about feeding, watering, entertaining, and egg collection. I shovel the sh– manure.

We chose a site close to the house because our lot is tiny and literally everything on it is close to the house it will suck to be out chicken keeping come winter, and the shortest walk=the fewest cold feet/hands. I hope to offer my girls supervised free-ranging once they’re heavier, and less inclined to scale the 4 foot fence line between us and our closest neighbors, but the area is rife with hawks, and while “Hawksnack” appeals to my gallows sense of humor, it’s not really a great name for a deceased, breakfast-laying pet. Thus, a run.

I opted for 48 square feet, which is comfy for the 4 girls, with a 4’x4’x4′ raised coop. It will be snug, if we get another 2 at some point, but we’ll assess. I hear the Chicken Math Struggle is Real. My contractor is thorough in the extreme and unable to under-construct anything. His only misgivings are that we didn’t dig footings, given that they design changed midway through to accommodate a sand floor in the coop. He took the “chickens want to be dry” message especially to heart. He also has a strong aesthetic and The Enchanted Tiki Coop is just off the deck, in partial view of the neighbors’ patio. No one likes a clucking eyesore, amirite?

Did I mention he fell a little in love with the ridiculous little raptors along the way?

And so it begins… 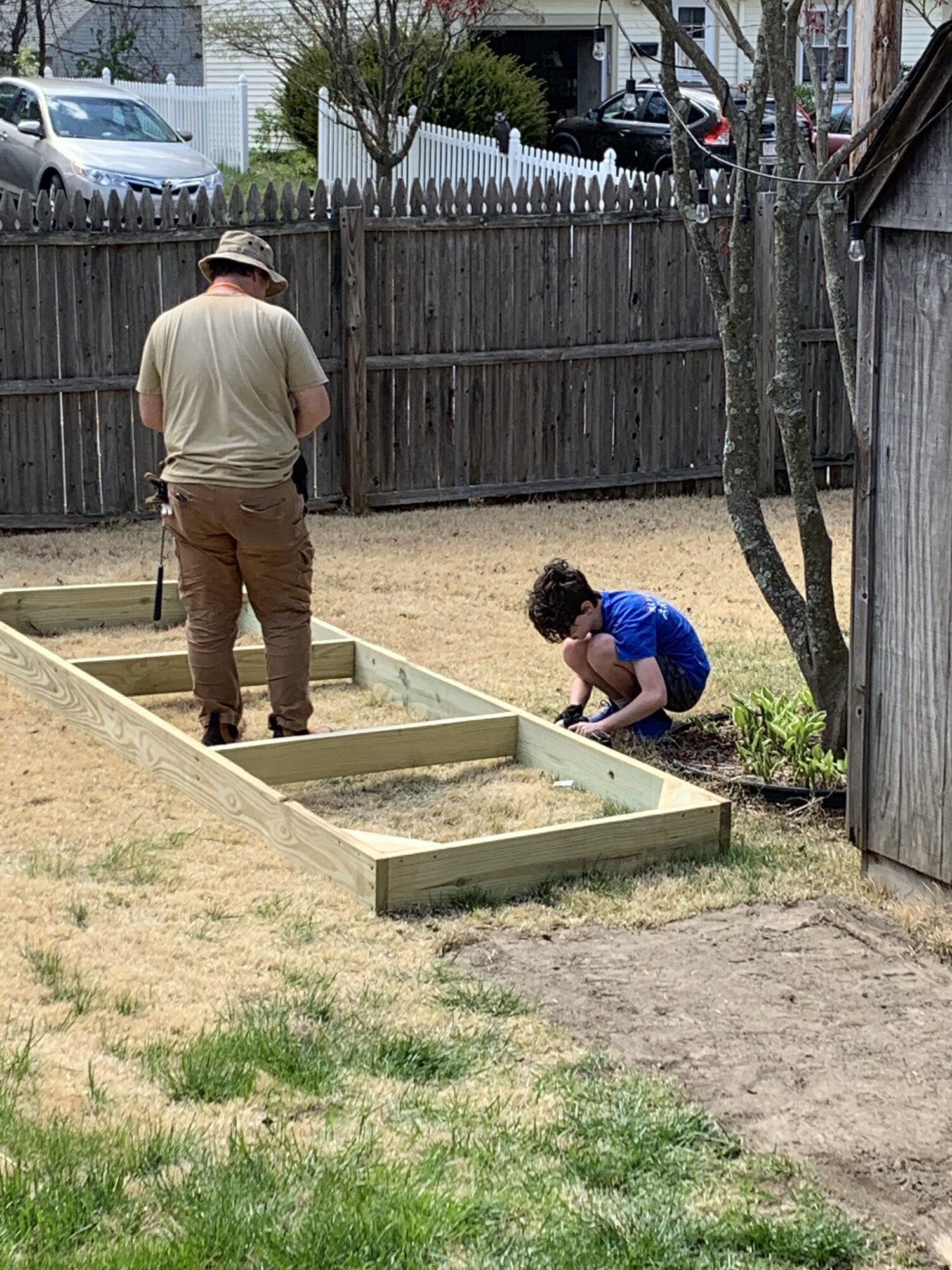 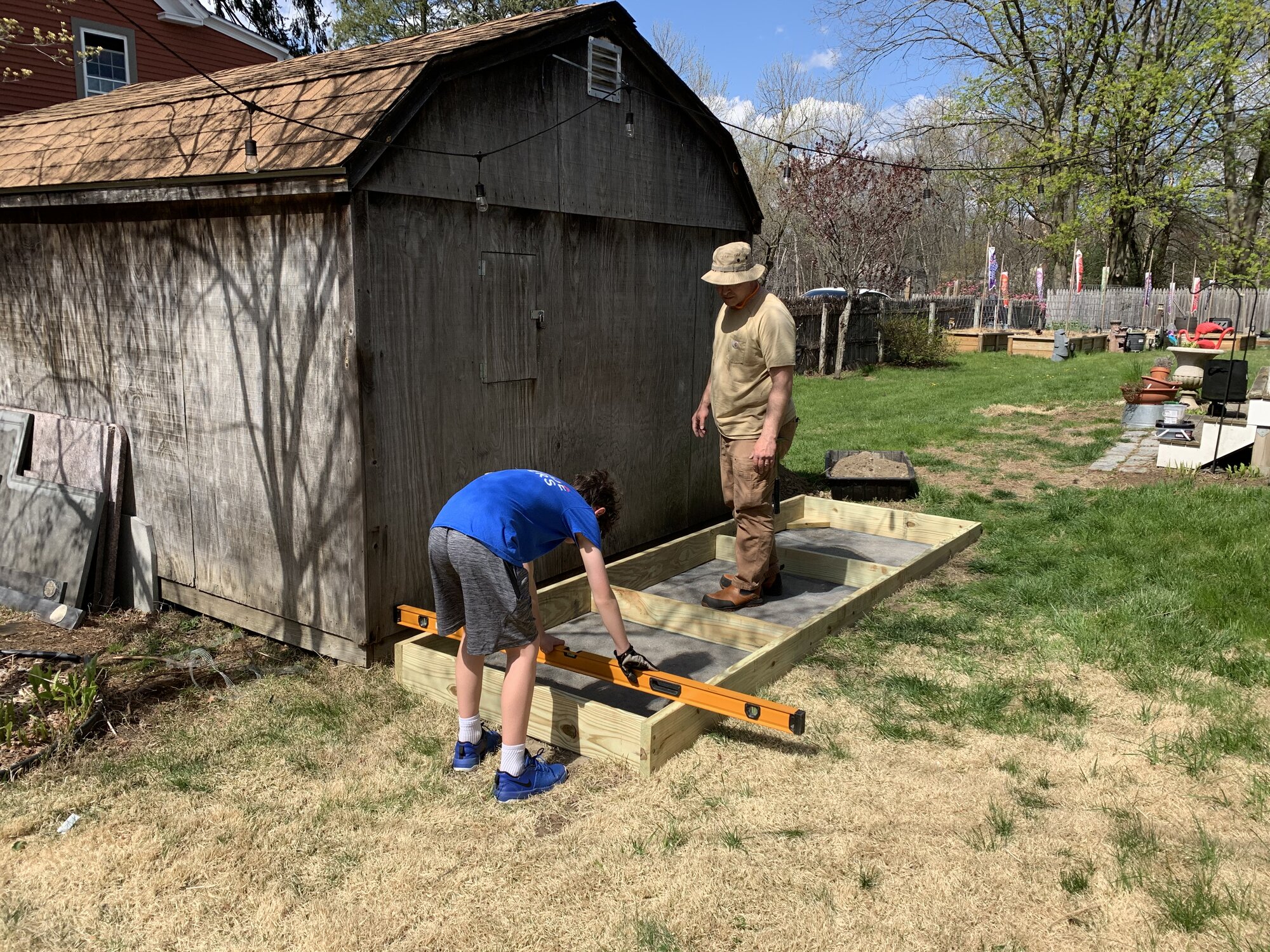 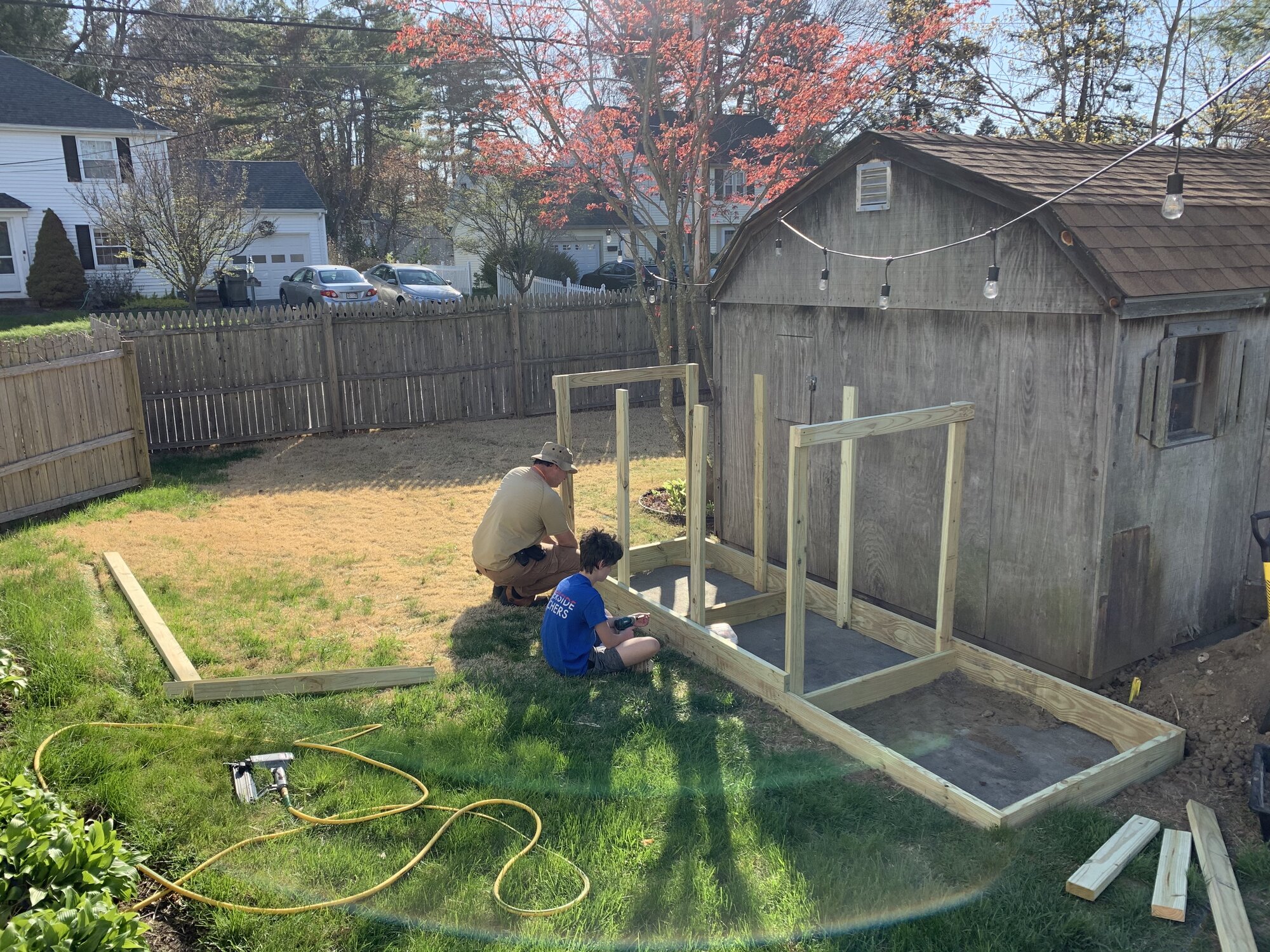 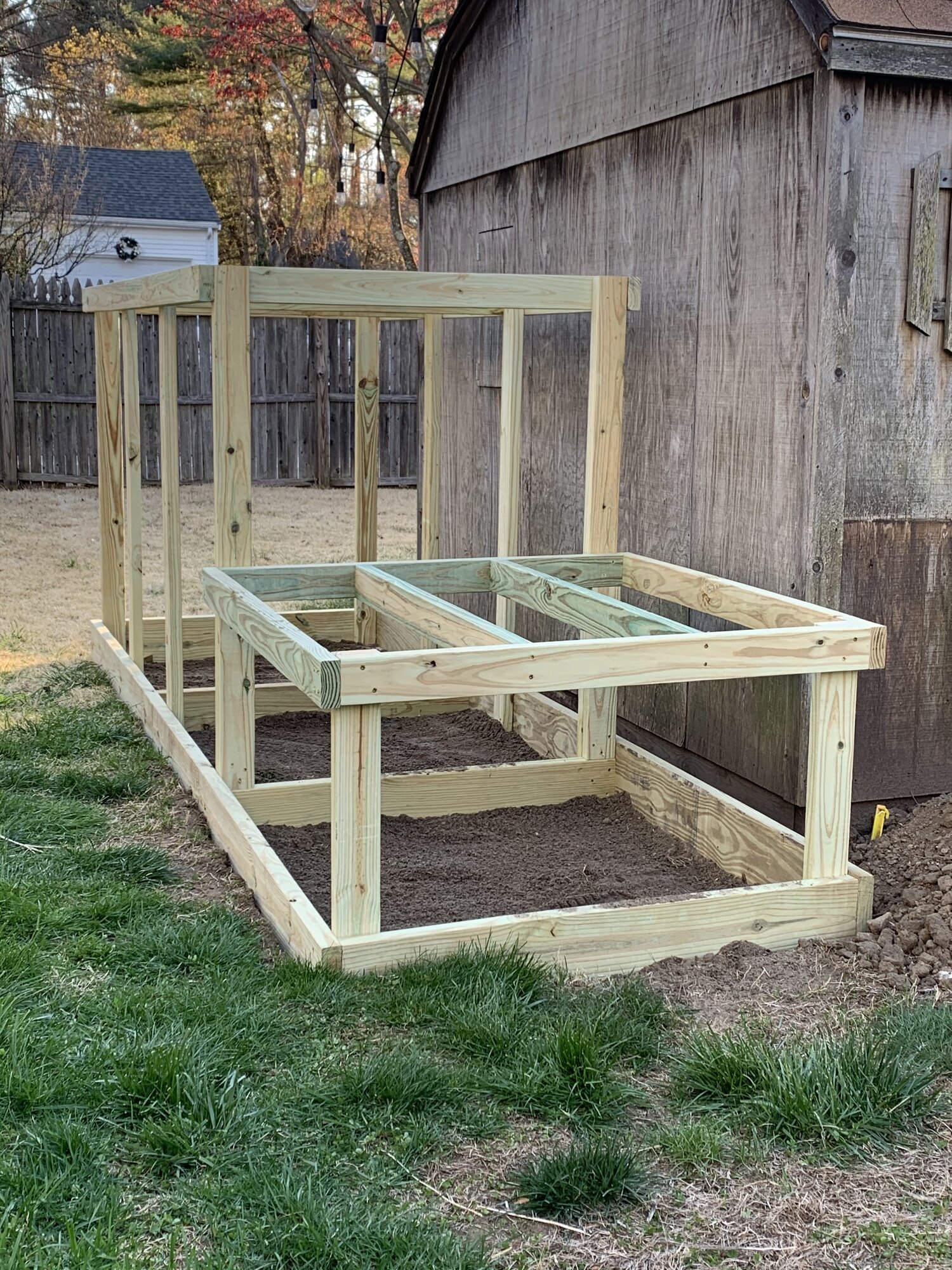 We dug out and leveled an old compost pile for the site, so I screened the compost (he re-homed what sod he could) and backfilled the run with the fresh topsoil. The plan is to amend the fill with summer grass clippings and fall leaves, as well as what pine shavings I have left over from the brooder. Next, he built 1/2″ hardware cloth panels to install on the run. Note the base is finished with 1/4″ hardware cloth to prevent diggers. The rolled bit was temporarily stapled in place where the coop would eventually be, so the girls–now aged 4 weeks–could safely play outside on nice days until they’re big enough to move outside. 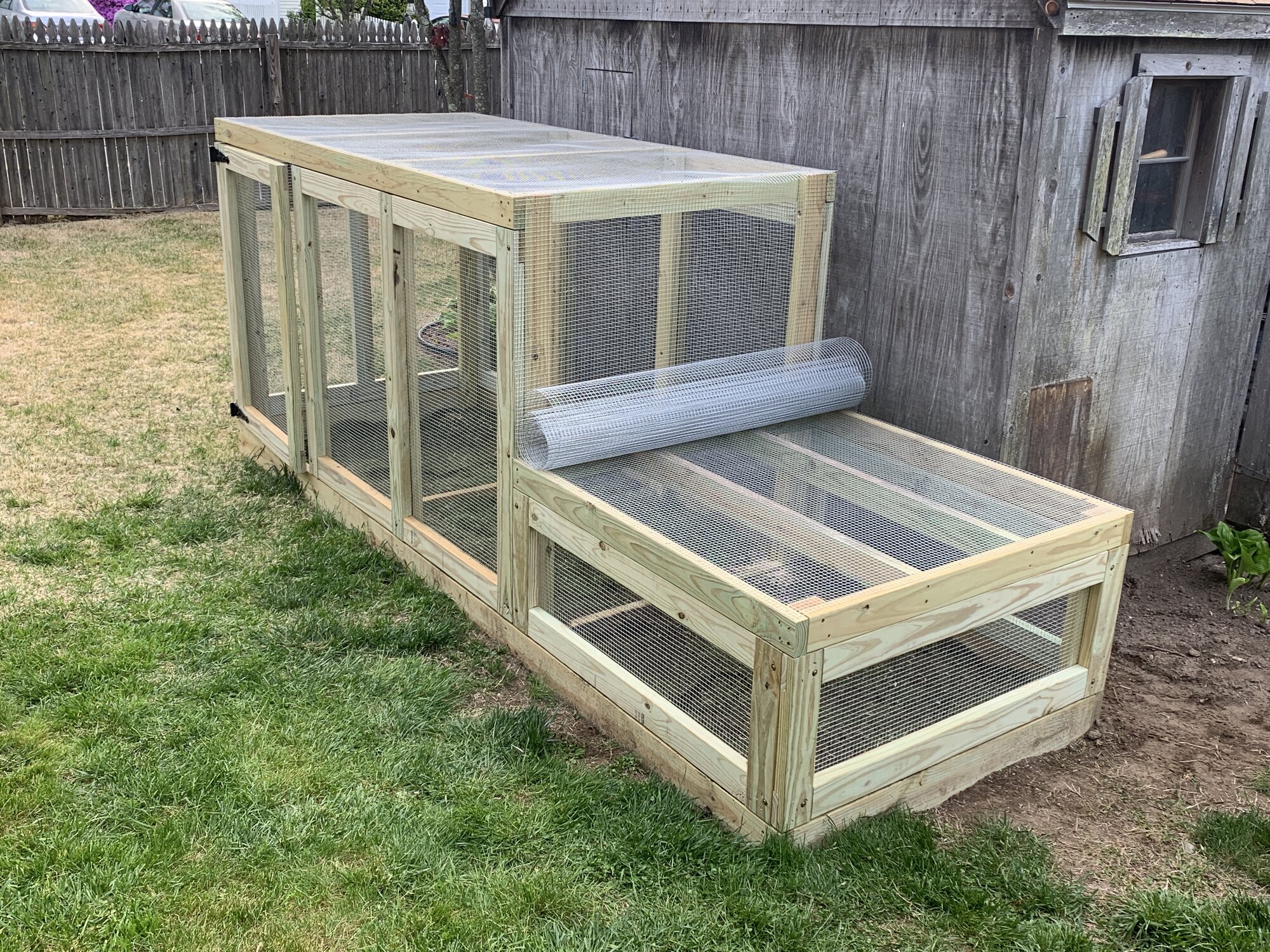 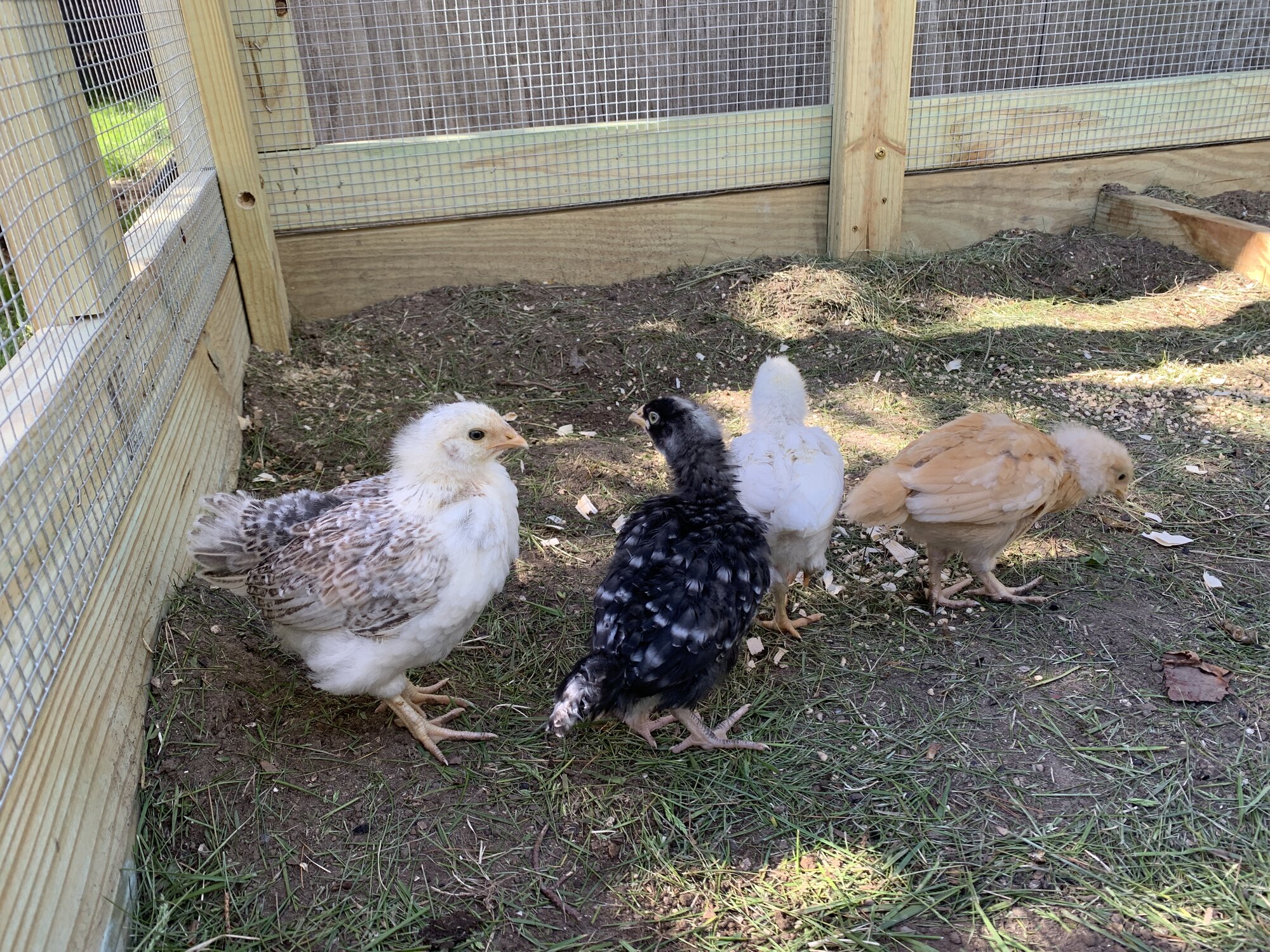 The run is about 4 feet high. I can’t stand up, but I’m hoping due to some design updates, that I won’t have to spend a lot of time hunched over in there. We shall see. The coop framing came together in a somewhat modular way. The opening for the cleaning/maintanance door is shown. The rest he cut in afterwards, as we worked out dimensions. He also added latches and a spring on the run door. I added some upside down pots and a big branch to the run. 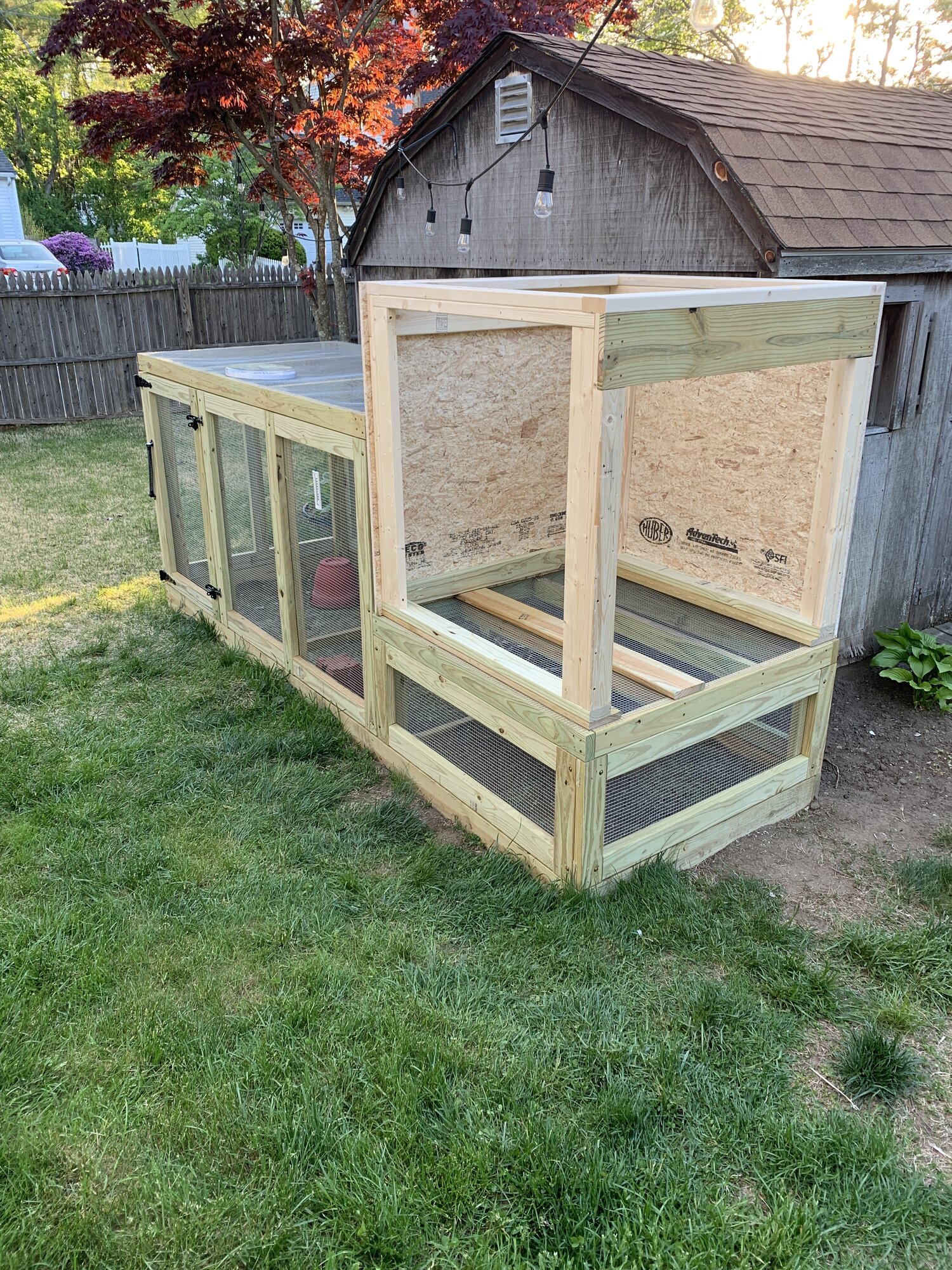 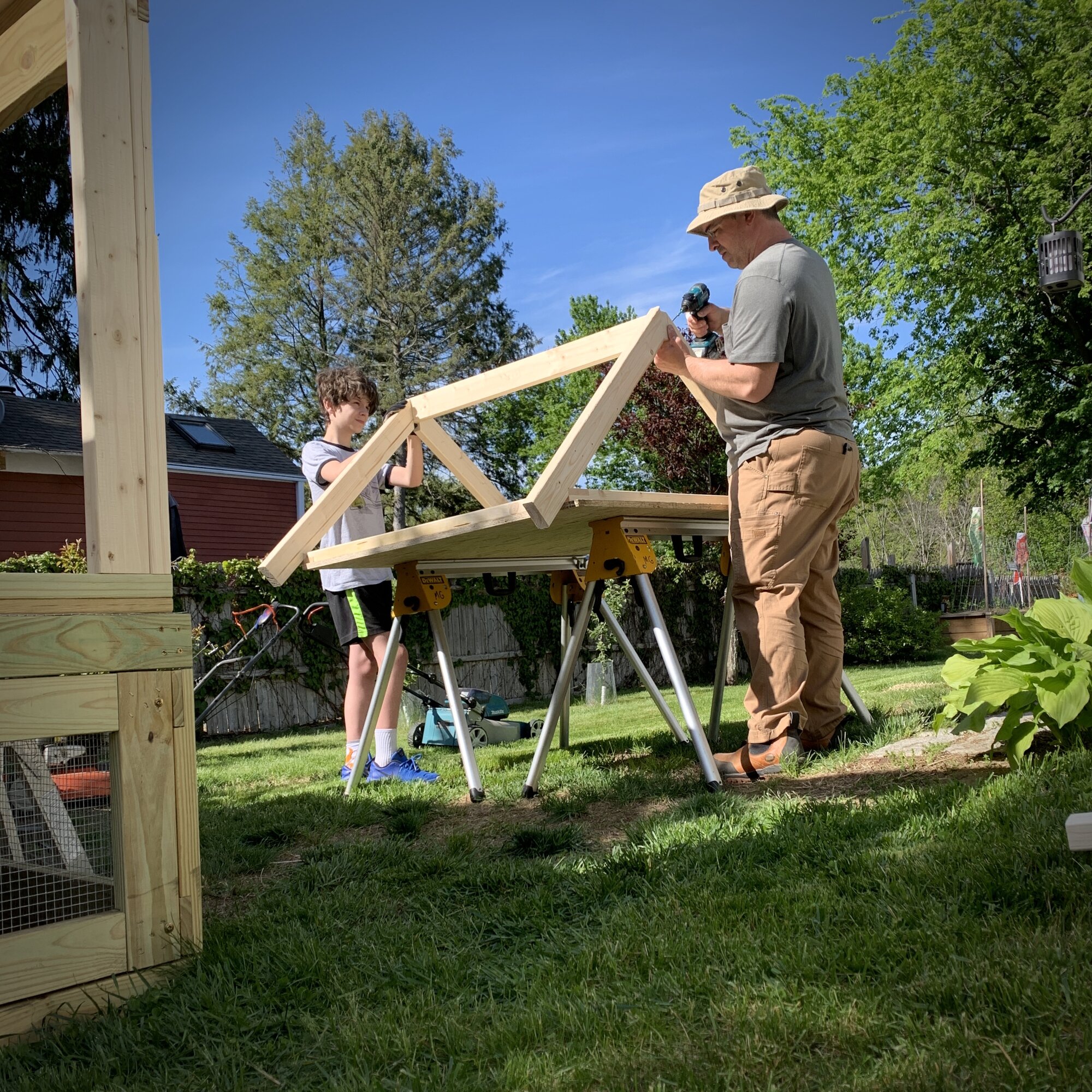 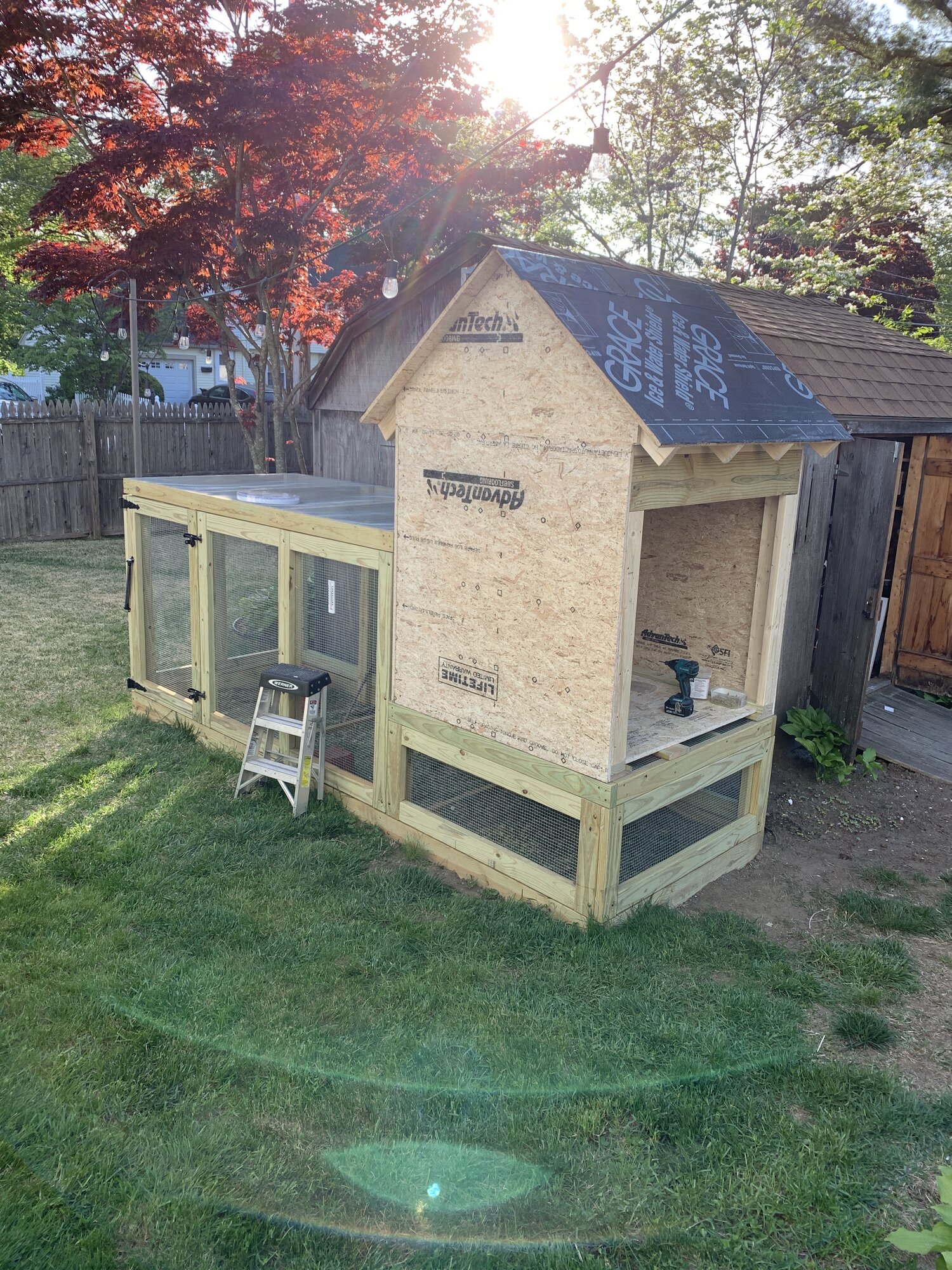 Here’s a fun four-day weekend: He used a set of snowblower ramps to bring the coop down to the yard, where he could work on it without scaring his feathered audience. Cut outs for a window, nest box, and gable vents went in, then he roofed it, and sided the two sides which would become inaccessible once it was re-installed. The board-and-batten siding is made from pressure-treated fencing, and has a rough, rustic texture. We may not paint, since it will age nicely to match the fencing we’re slowly replacing around the perimeter. The Omlet AutoDoor was a pricey upgrade, but I want to be able to leave the girls overnight without a full-time chicken sitter, and those guillotine-looking automatic doors made me nervous. 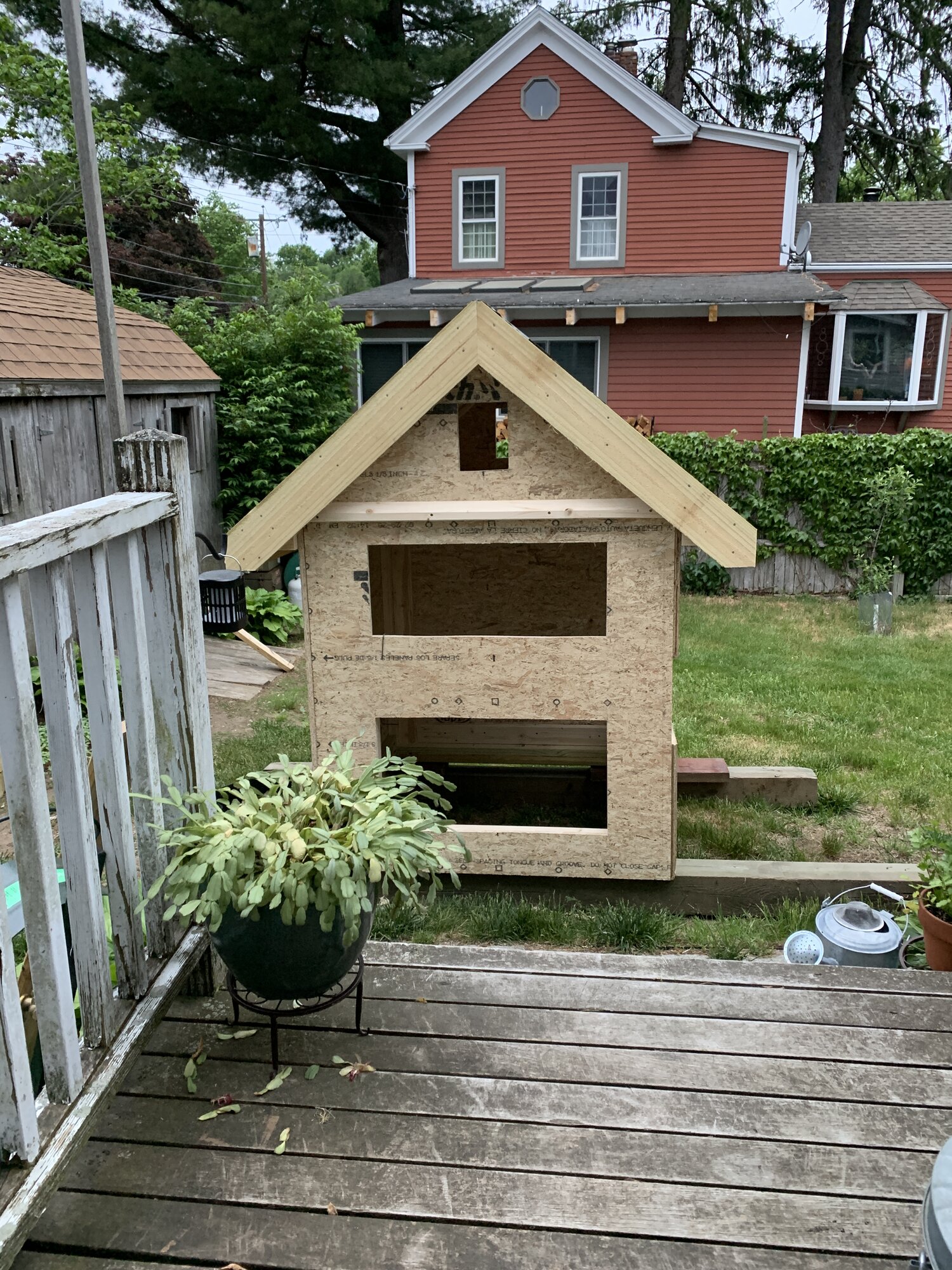 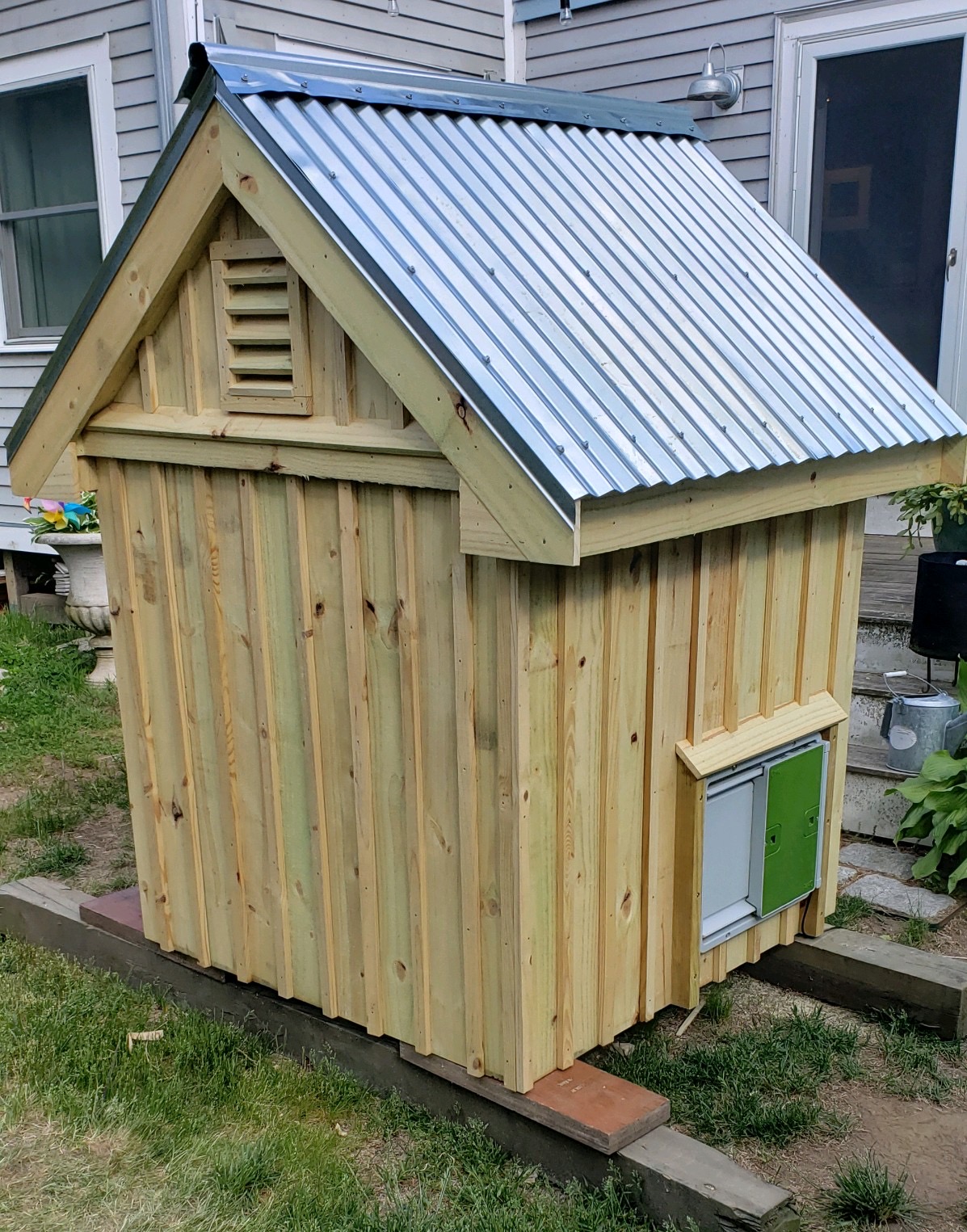 Then it was time to get the coop into place. It was…heavy. The GC ended up enlisting me to help him shift it Egyptian-style, with levers and blocks. It was dicey, but we did it! 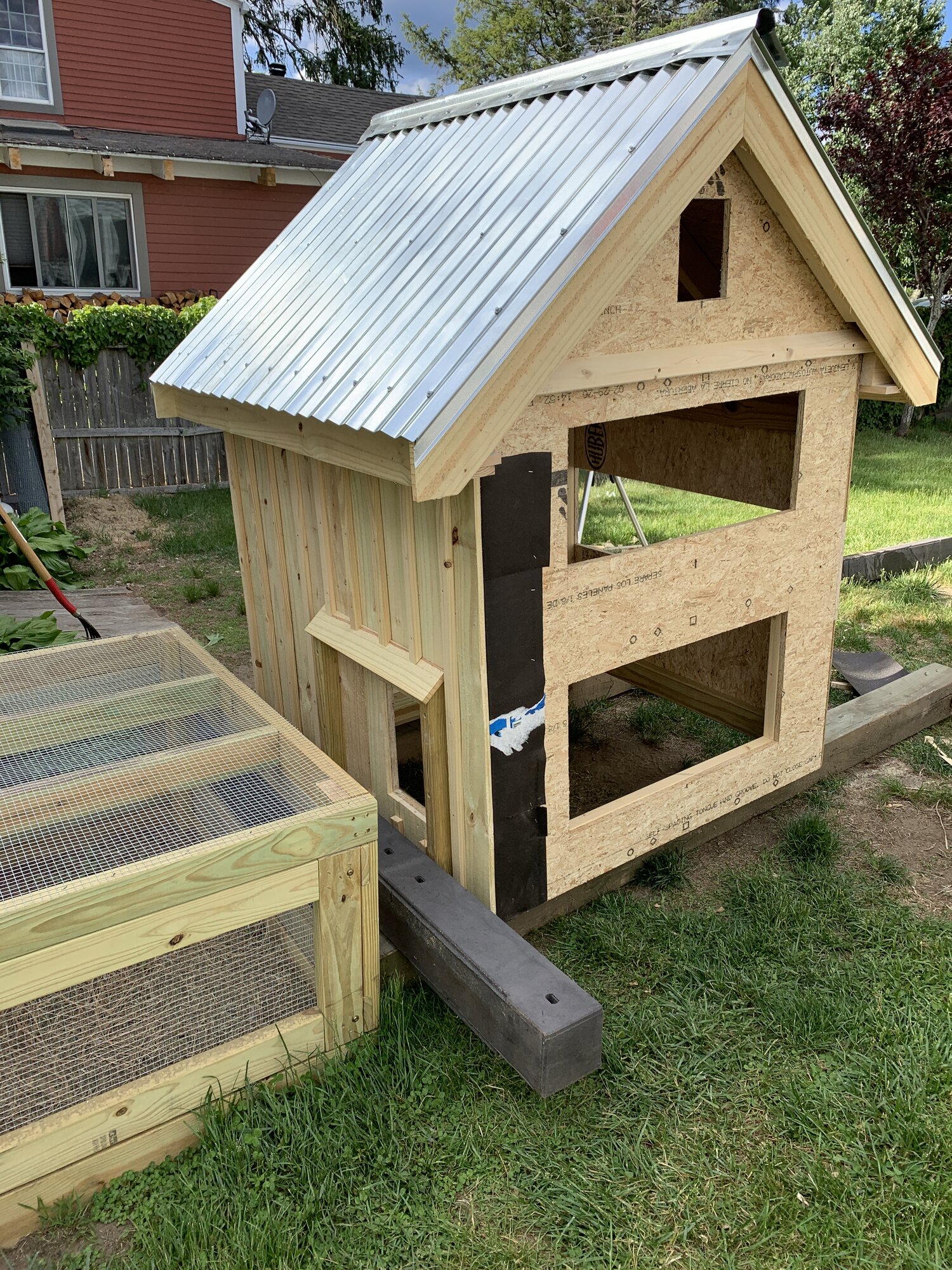 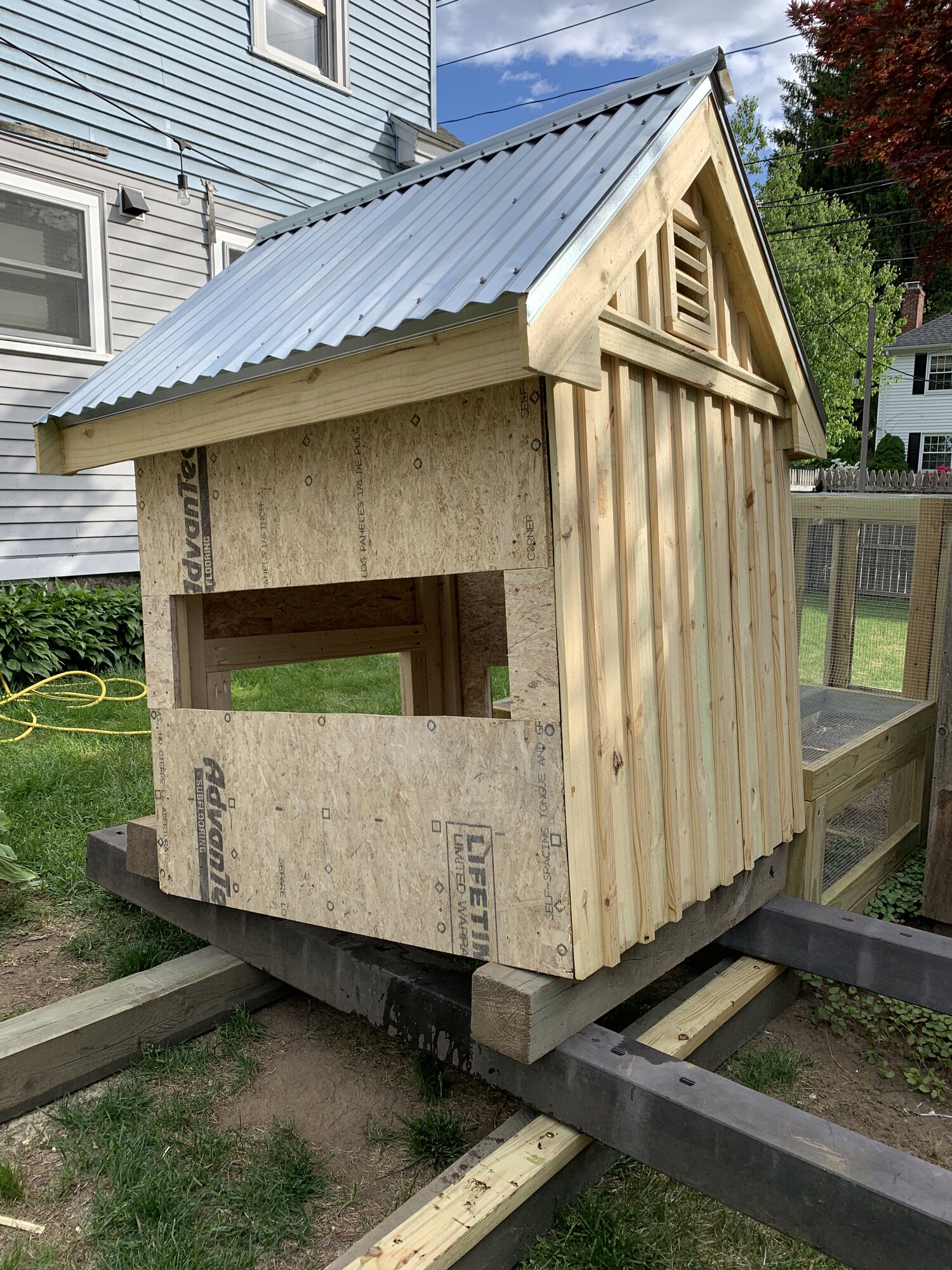 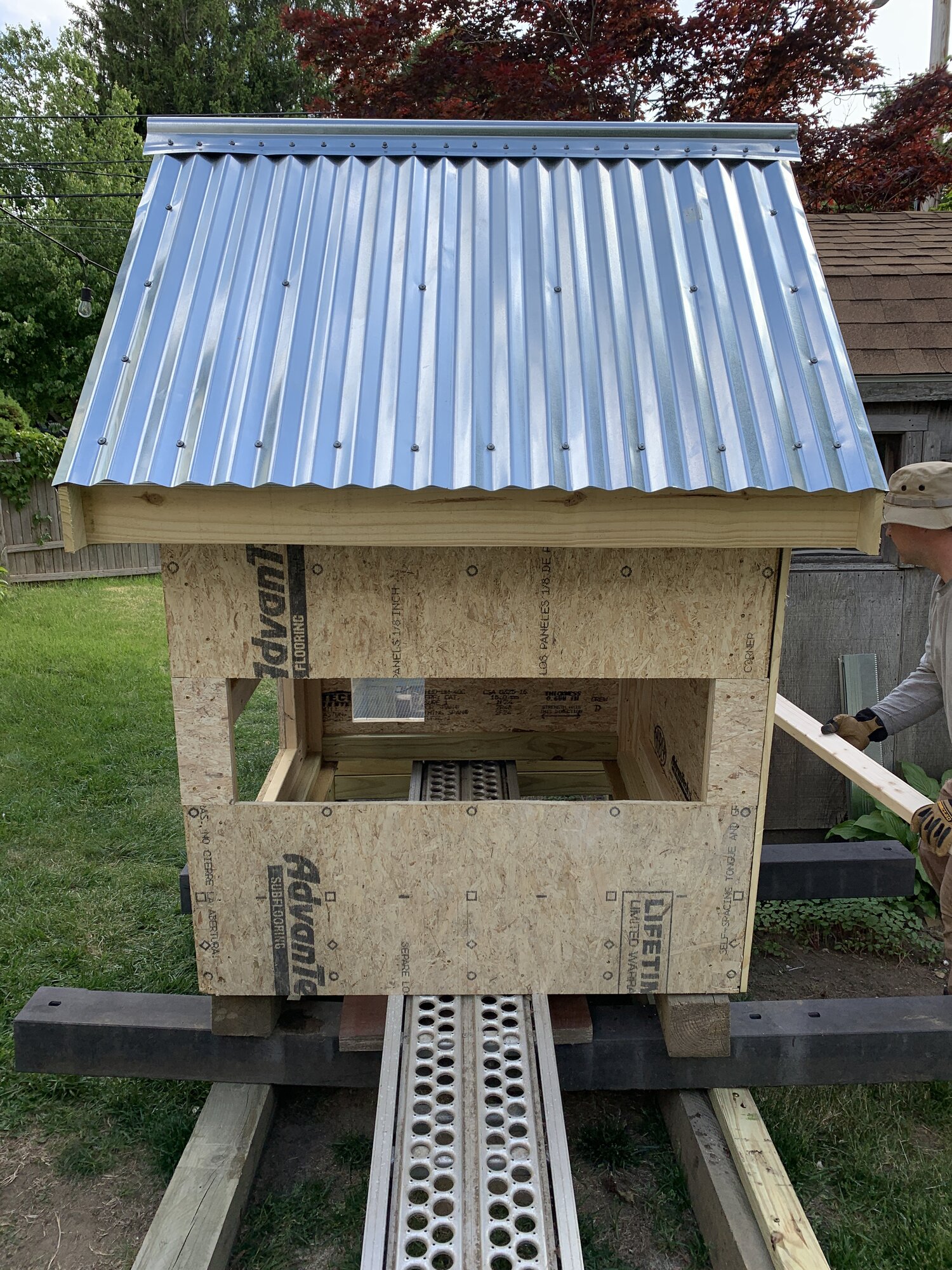 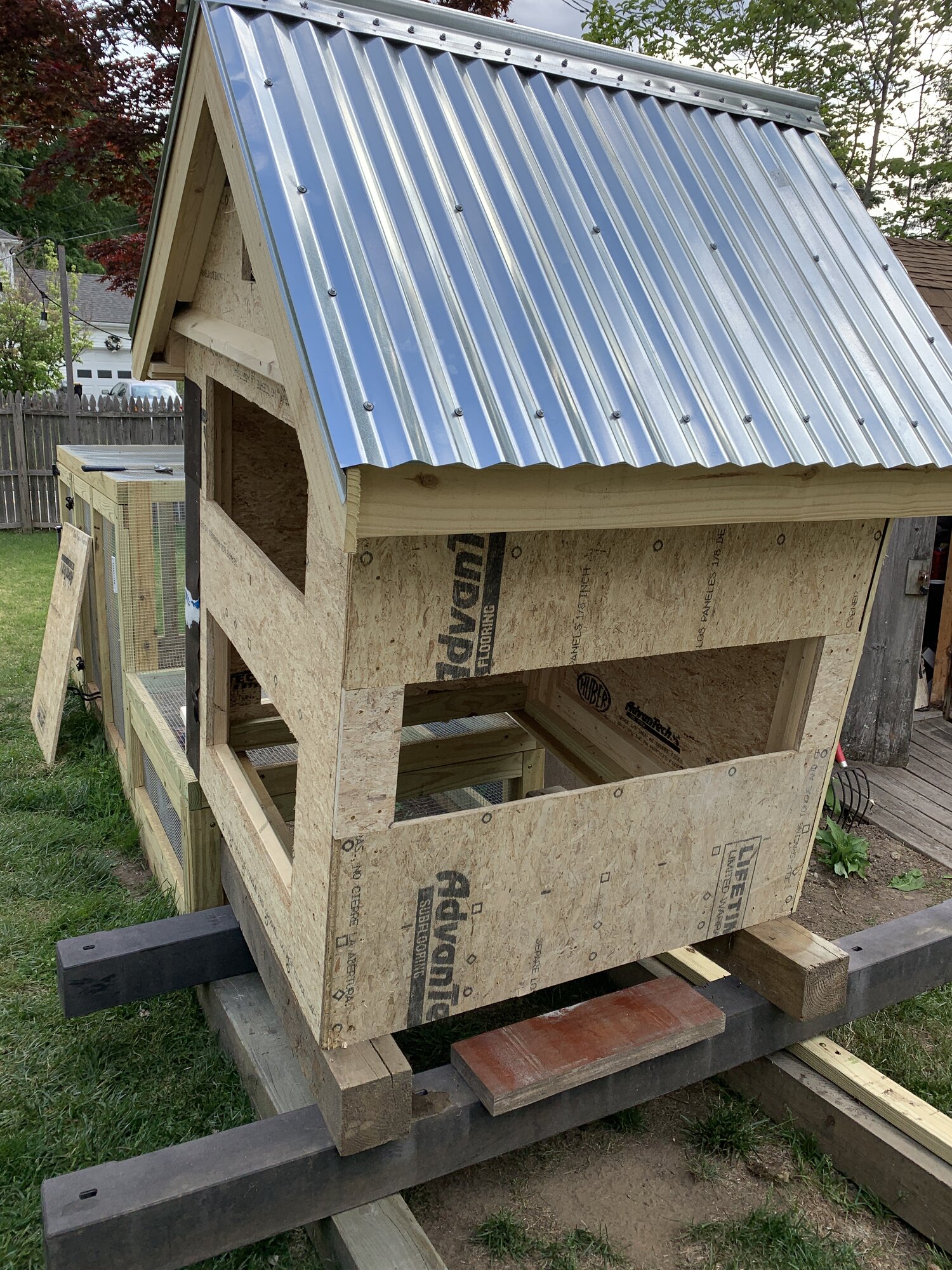 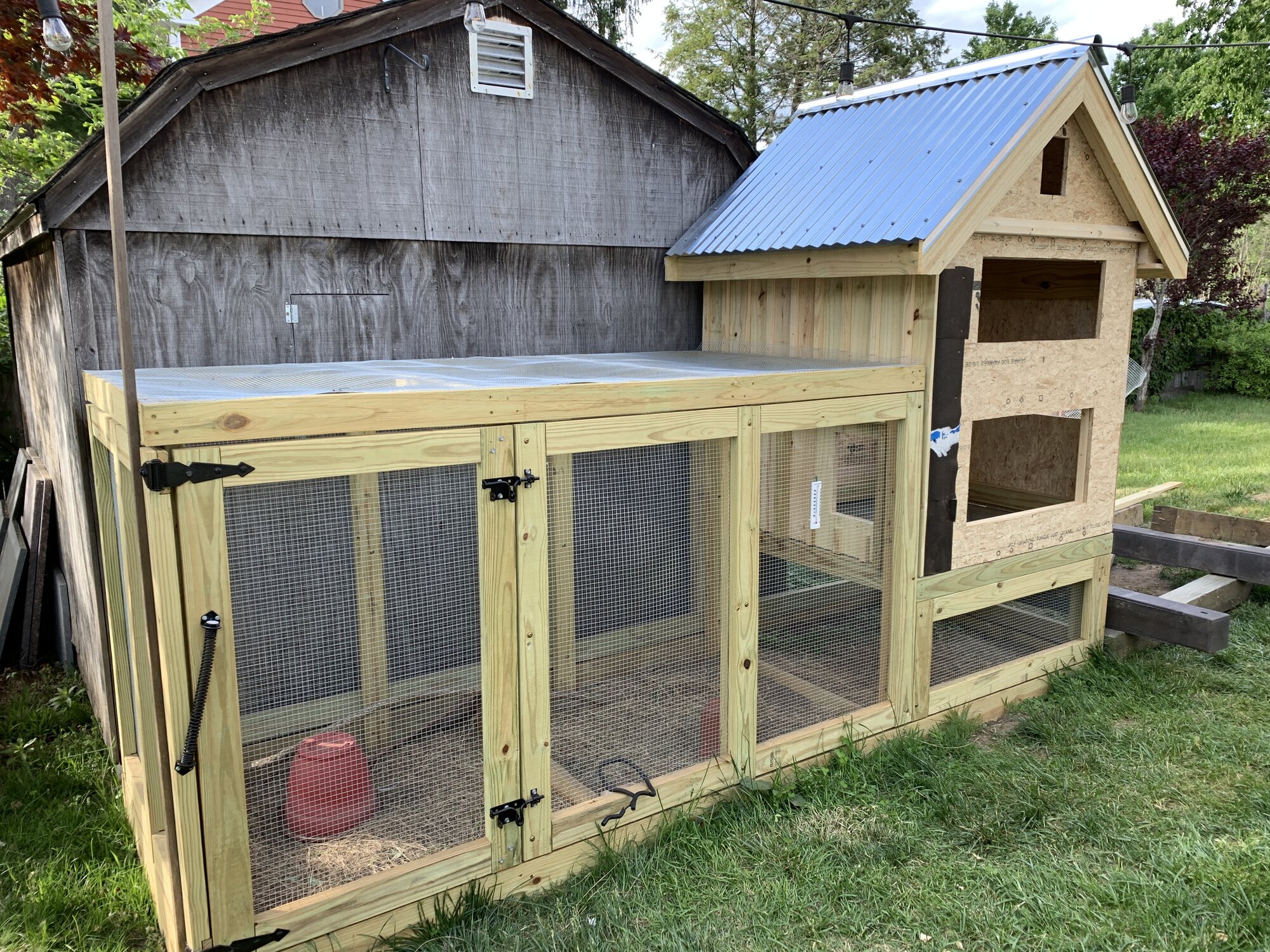 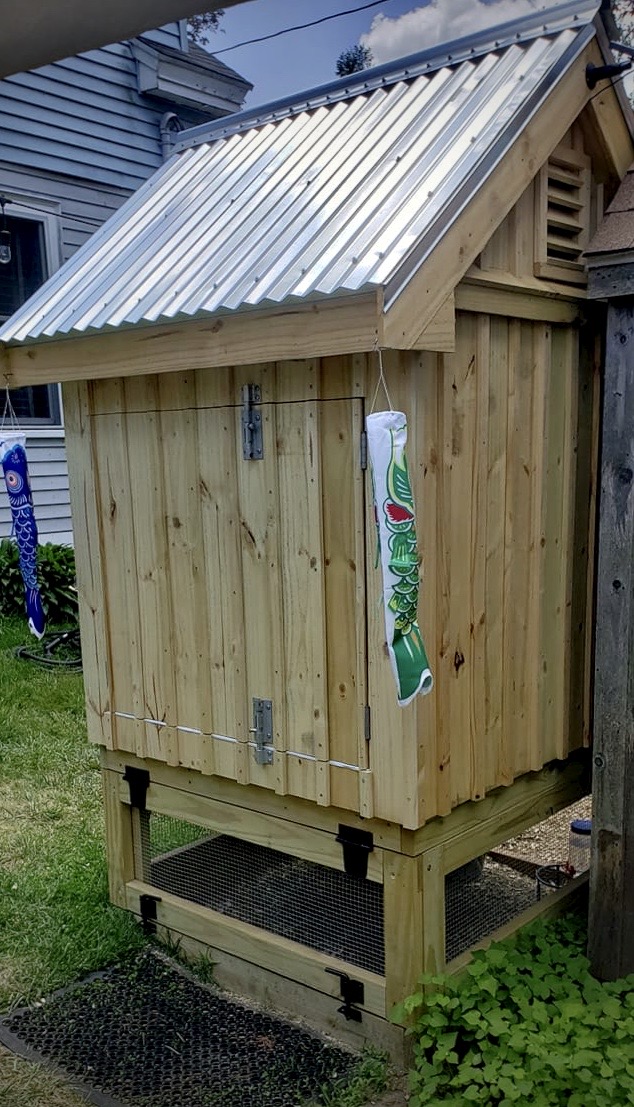 Two more long weekends saw the second gable vent, the next box, and the hatch-style window installed, as well as the roosting bars and the solar-powered wi-fi chicken cam. Siding is up on three sides now. The carp windsocks keep us from banging our heads.

We decided to do a sand floor in the coop, after reading The Chicken Chick’s article on the subject. She’s a New Englander, so I figured if it worked for her it could work for us, and I like the idea of scooping out only poops and a little sand to add to the compost, instead of having to fill it with shavings more frequently. With such a small property in a dense neighborhood, composting needs to be handled with some diplomacy.

The GC fabricated a sheet metal pan to fit the frame. For now, the nest boxes are blocked off with a broken down Misfits Market box. We have about 6 linear feet of roost, set up so they can use the lower rung to get to the upper one. (The first night they were in there, three of them roosted on the top frame of the box, so basically in the soffits, but what are you going to do? ¯\_(ツ)_/¯ ) 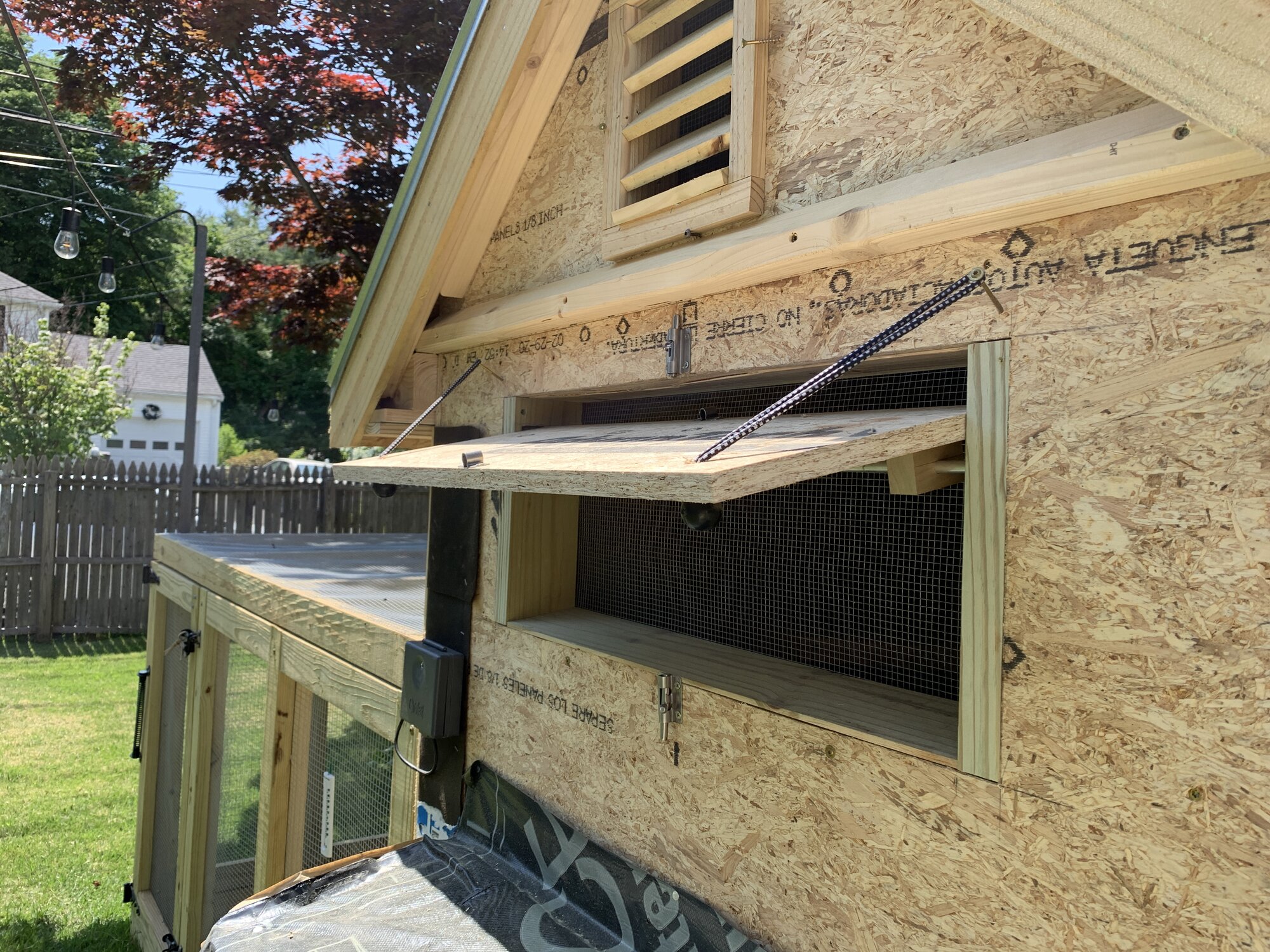 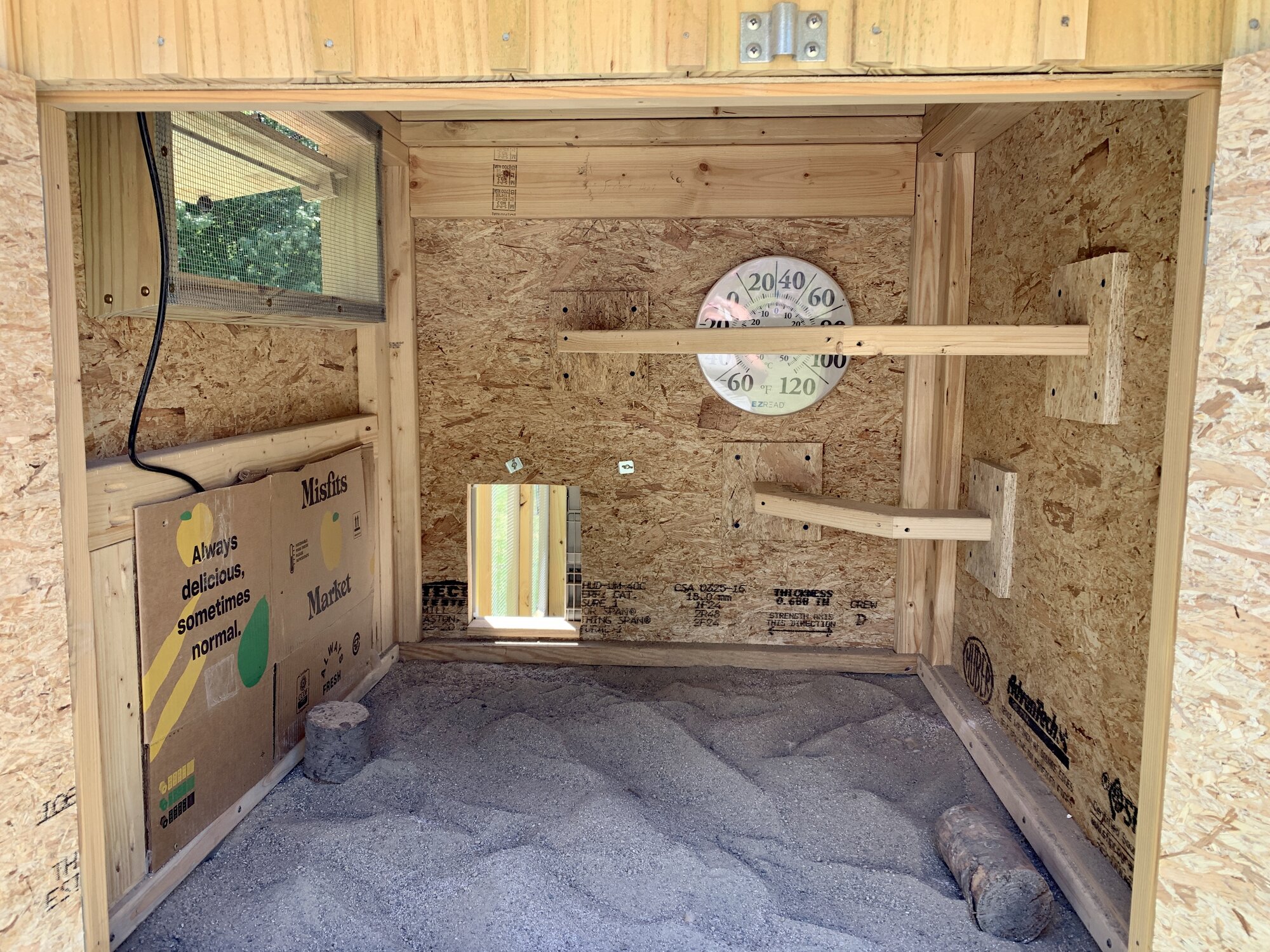 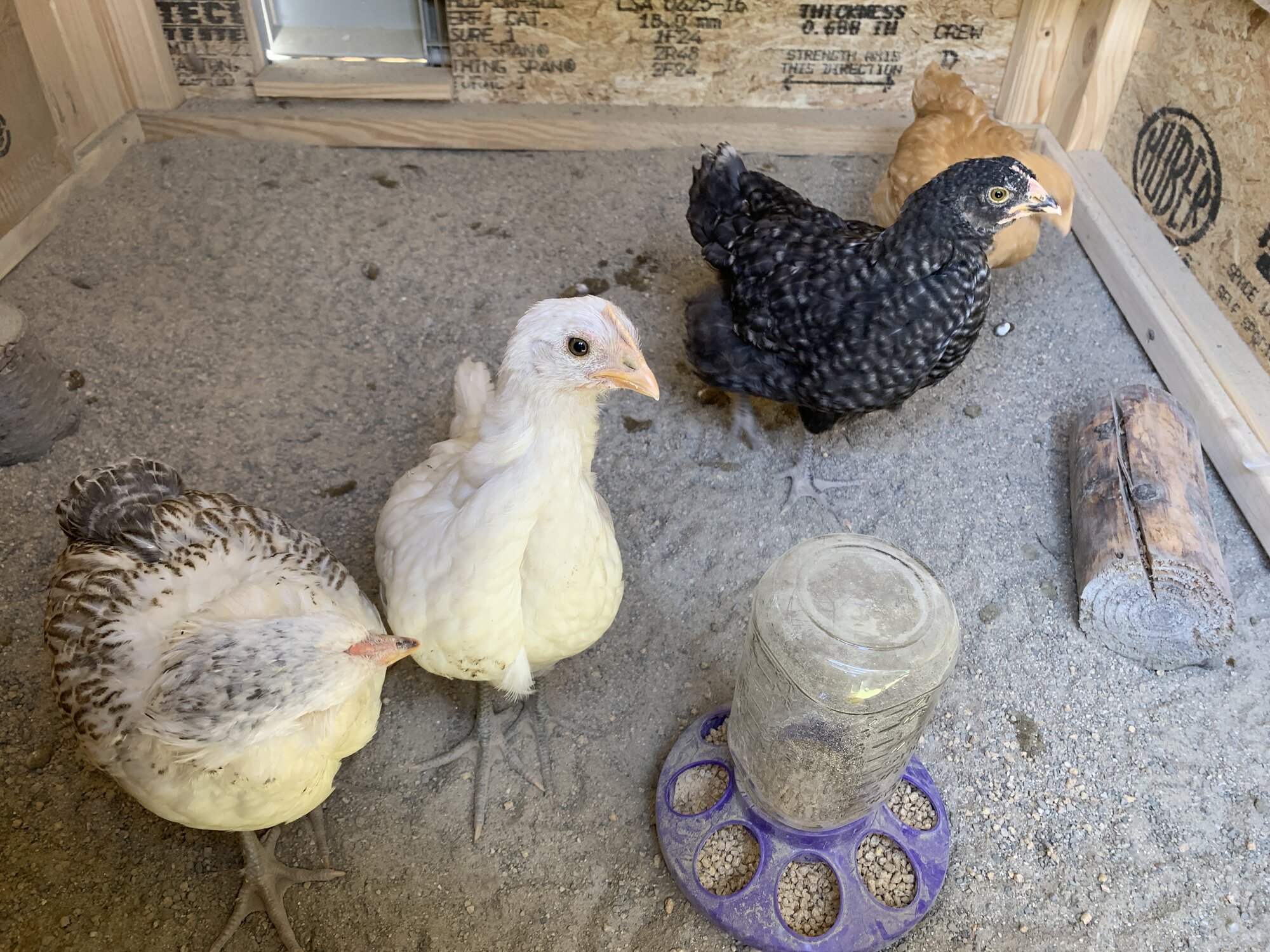 For the first couple of days of That Coop Life, they stayed closed in with their food and water, but we’ve shifted those to the covered run area beneath the coop, which hinges down like a tailgate under the coop’s access door.

I wanted to try the Sugar Maple Farm PVC feeder concept, but we decided that despite the conventional wisdom, we didn’t want traditional drain PVC leaching into the food source. We’re making a small food-grade polycarbonate bin feeder with 1/2″ CPVC (potable rated) fittings, and a horizontal nipple waterer from a smaller food-grade polyethylene bin, since I want to max out the space in the run for chicken playtime and foraging while minimizing the daily feeding routine.

Why the Enchanted Tiki Coop? We’re huge Disney Polynesian Village and Adventureland fans, and our raised bed garden has all kinds of tiki themed statuary and the carp windsocks for charm and scaring off critters. We call it the Enchanted Tiki Garden. The GC added a statue to guard over the run, so it’s thematically connected now

The girls seem to be enjoying themselves! 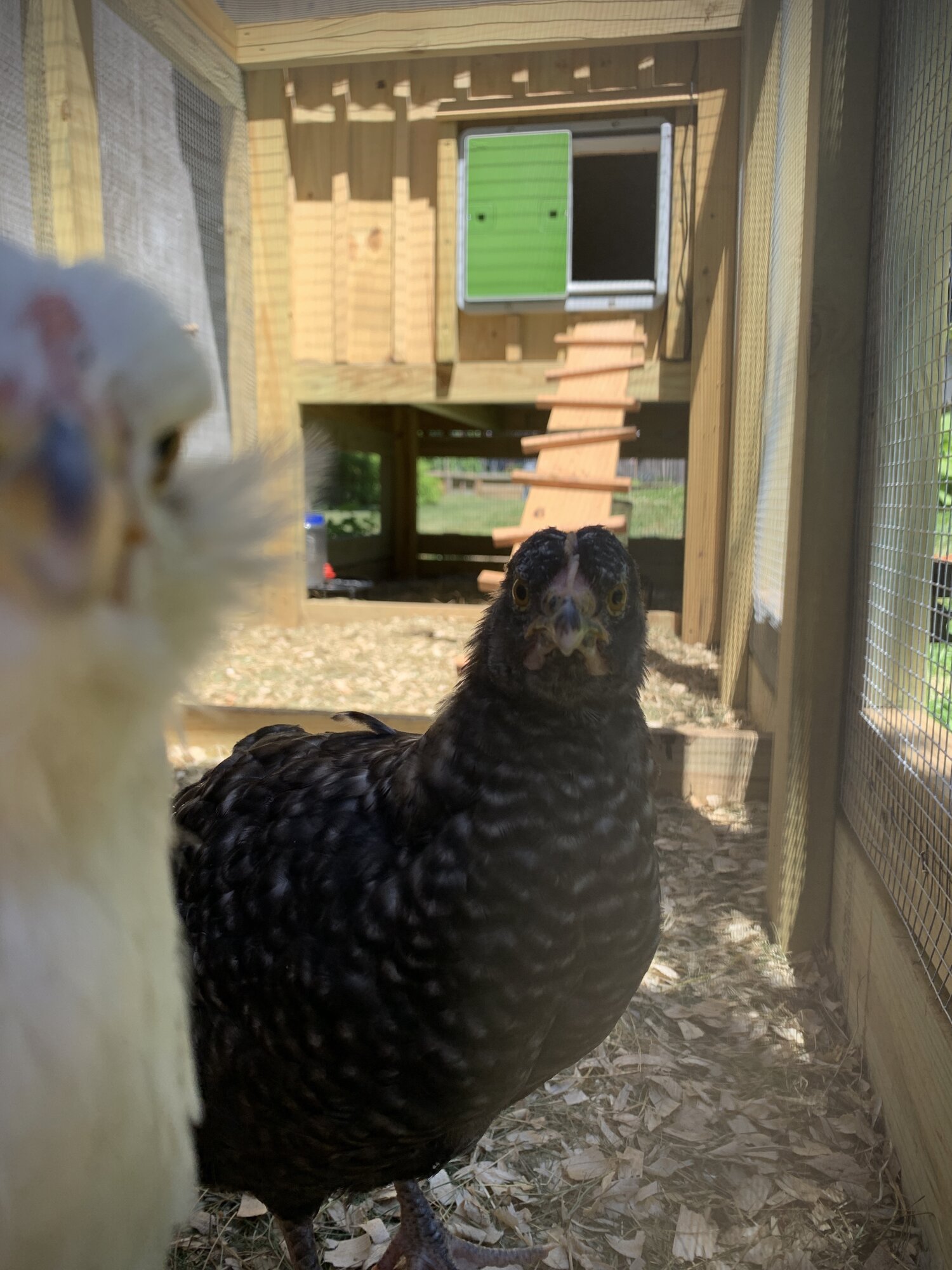 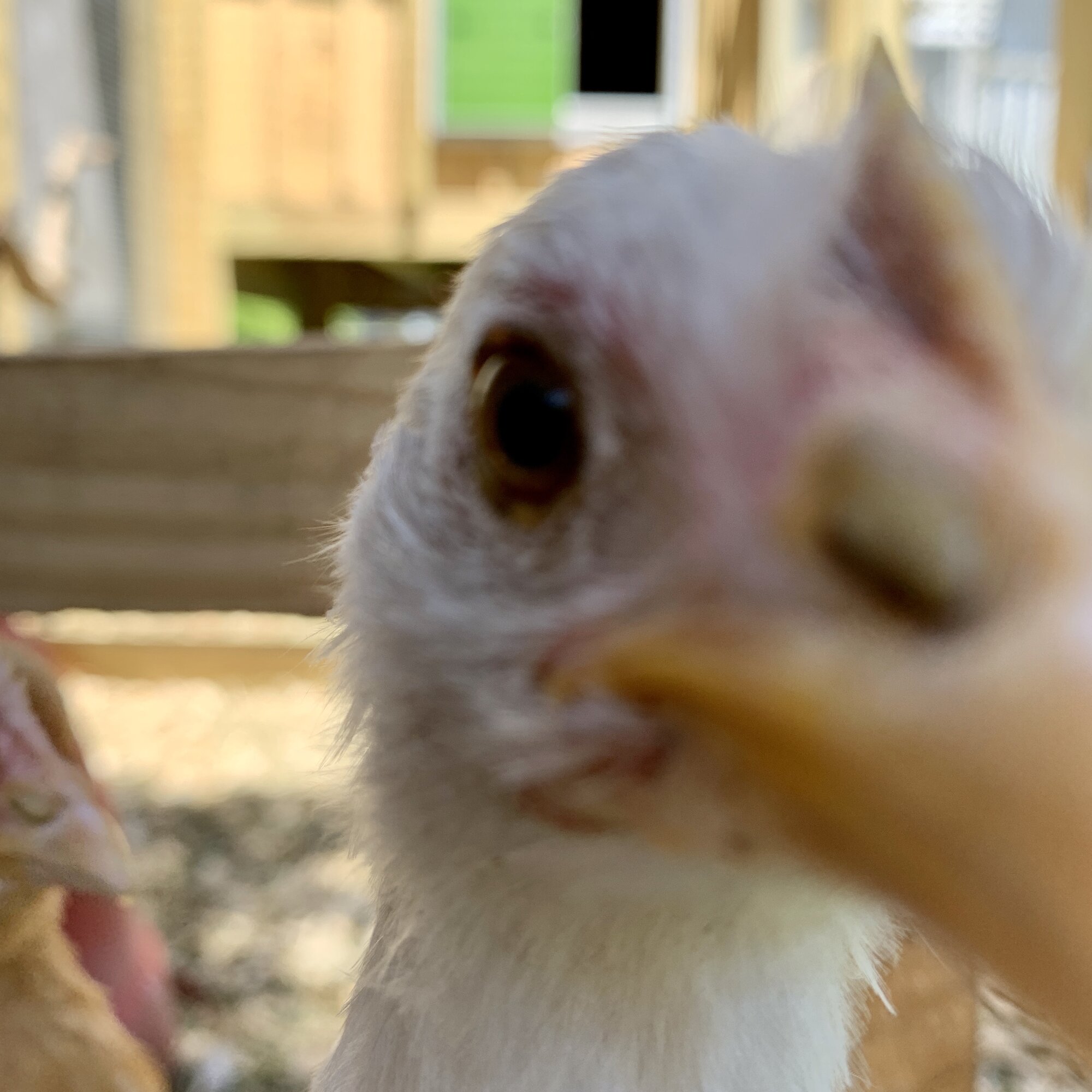 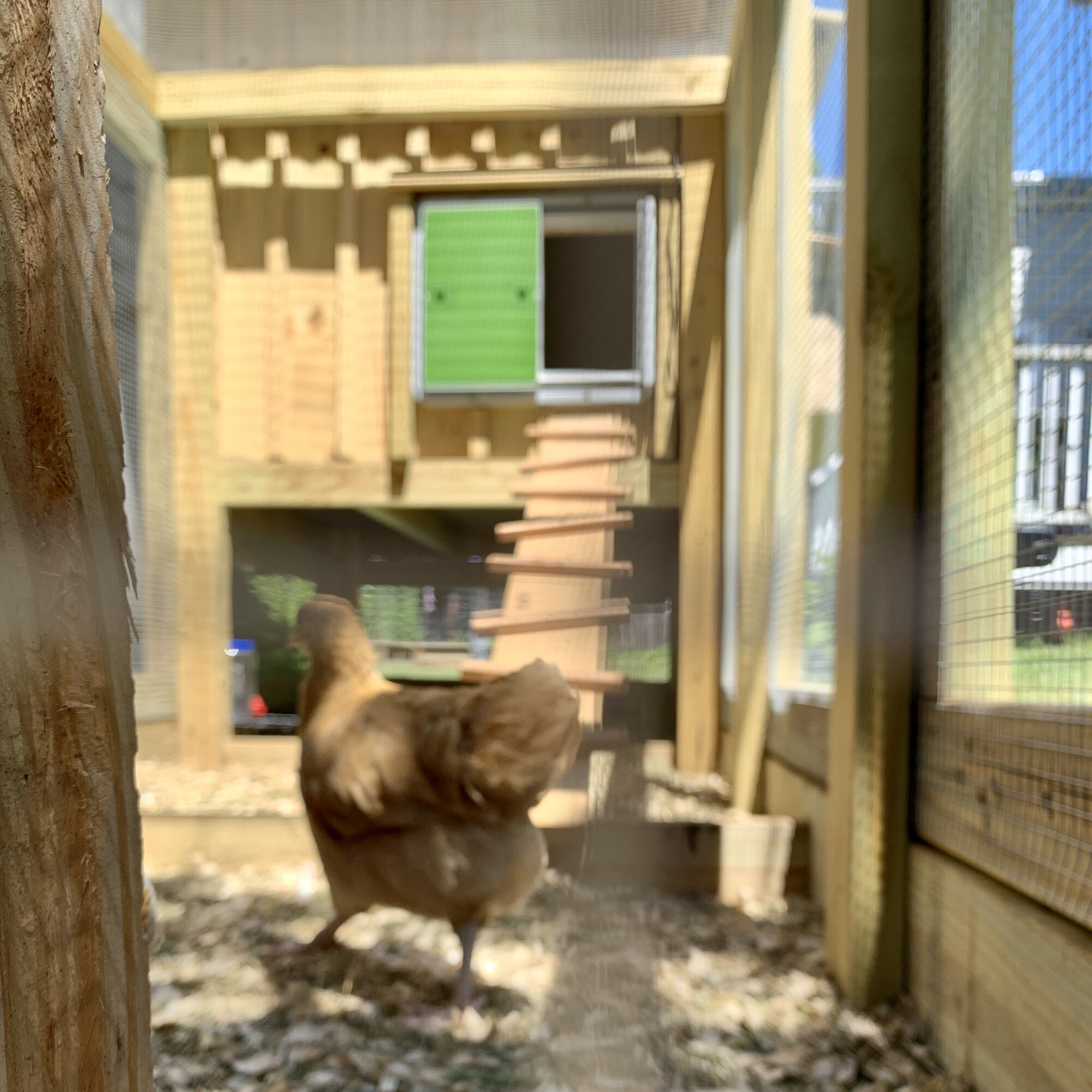 We’ll use the same salt marsh hay we mulch the gardens with to line the next boxes when the time comes. Updates as we finish!